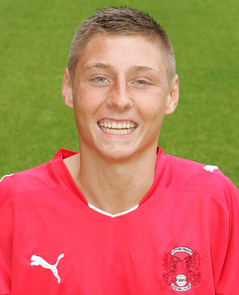 Midfielder Harry Beautyman is bidding to work his way back up the football ladder after recently signing a new eighteen-month contract with the Blue Square South club Sutton United.

Beautyman, who came through Leyton Orient’s apprenticeship programme spent one year at the club as a professional. The accomplished midfield man however struggled to force his was in to Manager Russell Slade’s first team plans despite skippering the O’s Reserve side.

He spent much of the 2010 – 11 season out on loan at St Albans and Hastings United and it came as no surprise when he was shown the Brisbane Road exit door in June.

Rather than resting on his laurels the 19-year-old felt he has a point to prove to those that doubted his ability to make a full-time career out of the game. He joined Sutton in August and with the club in the promotion shake-up for a place in the Conference National his decision to join the Blue Square South new boys appears to be vindicated.

He recently signed a new 18 month contract with the U’s and their Management team have been delighted by the way he has settled in to life at Gander Green Lane.

He’s obviously settled in to the club particularly well, and is a fantastic example of someone who’s come out of the pro game and wants to get back in to it,” said Manager Paul Doswell.

“I’ve said that he can do that with us, but he probably needs to be playing fifty or sixty senior games before he gets the move back that he wants, and he sees us as the best club to give him that opportunity.”

“He’s someone we like, as a person as well, which is always important as far we are concerned, and the fans like him, and he comes in with a big smile on his face which wasn’t necessarily the case in the summer when he was trying to get himself sorted out after being released by Orient.”

It’s another good example of a young player who has come to this club and received excellent coaching from Steve McKimm and Paul Telfer, and that reflects in the fact that he was keen to sign a new contract.’‘