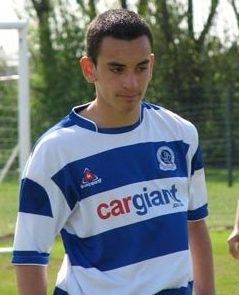 Danny Fernandez signed for QPR in 2008 where he completed the ASE programme but two years down the line the Club decided there was no place for him in the first team and he was released. Despite the disappointment of being left without a Club, a number of other doors opened for the youngster.

The striker, who was an attendee of LFE’s 2010 Careers Events decided the time was right to move in a completely different direction and is now carving out a career in carpentry.

With the job market becoming an increasingly competitive and tough environment, Fernandez decided that learning a trade would give him the chance to construct and maintain a new career.

“I was lucky to be offered a full time job especially with it being so difficult out there at the moment and the one thing I’ve had to do fast is develop the knowledge and skills required, now I’ve done that I really enjoy going to work,” said Fernandez.

It does involve long hours and long days but I couldn’t sit in an office all day so I appreciate not working in the same place week in week out.”

His day to day job working for Upright Carpentry & Construction includes full house refurbishments, building kitchens, flooring and other areas of construction. On the job he primarily works with wood and other industrial materials.

As well as plying his trade as a carpenter, Fernandez signed for Leatherhead FC in the Ryman League on semi-professional basis. He says: “I’m enjoying playing at this level even though it’s a step down I think I have the best of both worlds because I have income from two places.”

Fernandez’s commitments don’t stop there. Following his release from QPR, he passed his refereeing badge and is the man in the middle on Saturday and Sunday mornings at local junior football matches.