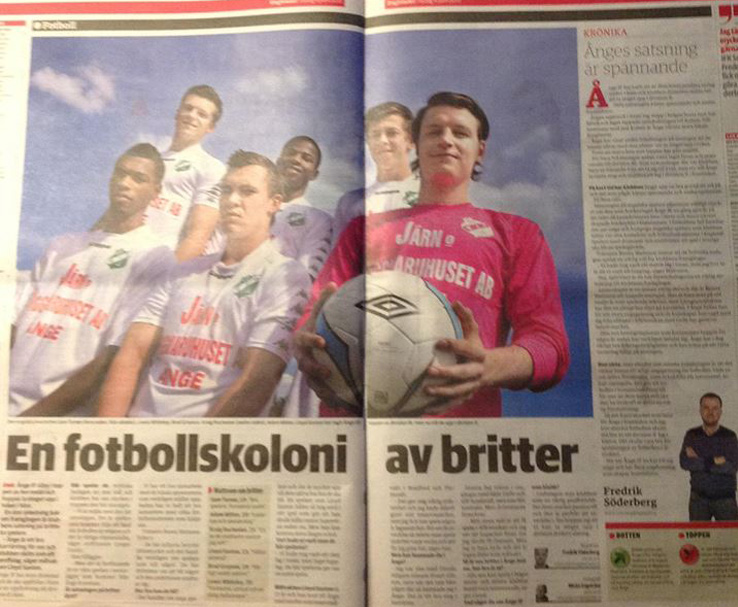 As I’d previously mentioned before, because we’ve been doing so well as a team there is a great buzz around the town and were getting a lot of attention from outsiders as well. This week a local newspaper requested to take pictures of us and do a double page spread on how our season been going so far. This is great publicity for Ange and something that will boost the profile of the club and hopefully attract more people to come and watch our games.

Due to the fact I picked up an injury in the game last week for GIF Sundsvall I couldn’t play for Ange at the weekend, when we meet Solleftea GIF. Though I was injured and couldn’t play, I still went to the game to watch and support the team as we tried to get our sixth win in a row.

We started the game quite well and were playing some good football when we were awarded a penalty for a foul in the box. Brad took the penalty and scored and we found ourselves 1-0 up within the first 15 minutes. Unfortunately, in the 35th minute a ball was played over the top of our defence and Lloyd decided to come running out of his box to ensure their striker couldn’t run onto the ball. As the ball bounced it spun up and hit Lloyd on the arm and the referee gave him a straight red card and sent him off. This changed the game for us because we had to take one of our midfielders off to bring on our sub goalkeeper Khordor.

We finished the half with our 1-0 lead still in tact but when the second half started we were put under increasing pressure and the extra man really started to show. As the second half went on Solleftea GIF created more and more opportunities and eventually scored a goal to make it 1-1. Even though we were down to ten men we had chances to kill the game off but we didn’t convert them and we were made to pay the price. In the 96th minute Solleftea GIF had a ball played into our box and their striker controlled it and struck a low shot into the bottom corner of the goal. It was a heart breaking blow, which has stayed with me all week and something that was even harder to swallow because I was not involved.

Fortunately in football, it’s never too long before another opportunity comes along for you to put the things right that went wrong. As result of us losing on Saturday we were over taken in the table by Kubikenburgs IF, the team we are due to play on Thursday. This is a massive game and hopefully one we can win, even without our number one keeper Lloyd. Wish us luck.