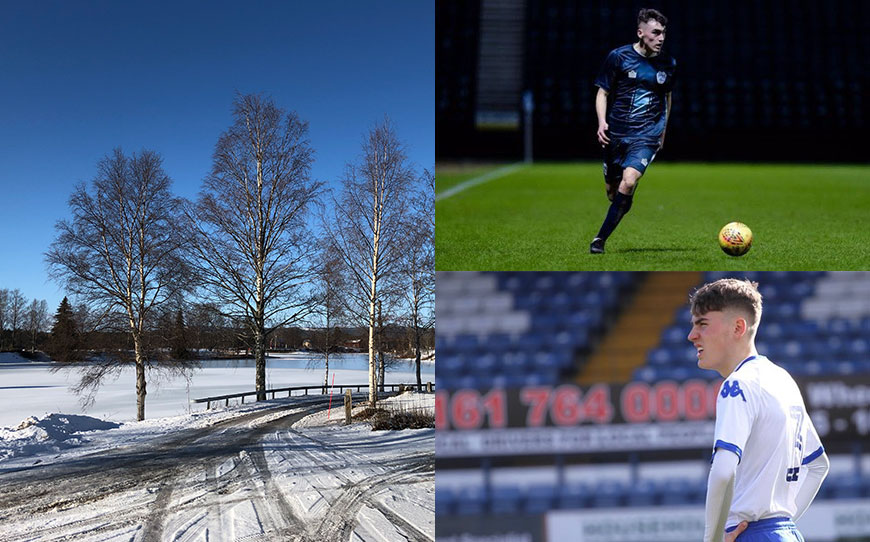 The total number of ex-apprentices to have taken part in LFE’s Erasmus+ Player Placement programme since 2008 is now approaching 300, with eight more apprentices experiencing Sweden before quarantine was introduced.

The 19-year-old enjoyed a month at fourth tier club Ytterhogdals IK before being forced to return home early due to the Coronavirus outbreak. Here, full-back Hatton gives an insight into the opportunity.

I really enjoyed my time in Sweden and it was disappointing to have to come back home. I’d like to go back because I loved the experience and there’s more for me to explore.

I’d probably lost a bit of love for the game after being rejected by Bury and then I went on trial at a few clubs but didn’t get offered anything, which was a bit demoralising. Heading out to Sweden has made me feel wanted again. Being back in a competitive environment and mixing with a group of lads who are all ambitious to progress was great and it can be a stepping stone to other experiences.

I expected it to be a good standard, but it was probably better than I thought it would be, even though I only played pre-season games. The level I was playing at in England was nowhere near what I experienced in Sweden. It might be fourth tier, but it’s really competitive.

When you’re in an Academy, you’re being pushed to be better every day and I think that’s what you miss in non-league when you’re not full-time anymore. To have that back again in Sweden was great and we were all pushing each other and demanding high standards.

A lot of lads in the group at Ytterhogdals are from England and so is the manager, so there’s a lot of common ground. The manager stressed that everyone’s left things behind at home and made a sacrifice to be here, so let’s give it everything we’ve got to make it worthwhile. That sort of attitude made it a great environment to be part of.

Obviously, it’s not just a football opportunity. You learn a lot about yourself being away from home and it can lead to a whole new life for some. There were a few lads out there who keep going back every year and some have made a permanent life for themselves in Sweden.

Before I went, I could get by cooking a few things, but I really developed that and made plenty of different meals, so I’ve gained a really useful life skill. There are other things that you probably take for granted if you’ve just been at home all your life as well, like keeping the house clean and washing up and just generally growing up a bit.

I was also learning some Swedish on the OLS (Online Linguistic Support) app on my phone and a few of the Swedish lads were helping me a bit as well. Even though everyone speaks English at the club, it’s all part of the experience to learn some of the language and it did help when I was picking out items to buy in the local shops.

We had a good relationship with the people who are in charge of the club, too. They told us that we’d be expected to integrate with the local community and he initially talked about going to the bingo hall and helping out there. The people in the town support the club, so it’s our duty as players to give back, although unfortunately we had to come home before I got chance to be involved in anything like that.

I’d recommend that people consider it as an option. Before my Regional Officer, Craig Skinner, mentioned Sweden to me, I was a bit dismissive and apprehensive about ever playing abroad because I probably hadn’t given it enough thought. Once I’d looked into it and made the decision to just go for it, the nerves were replaced with excitement.

Having had a taste of it, I think I’m more open to trying other countries now and seeing other parts of the world, so it’s definitely made me more open-minded and confident about taking on these sorts of opportunities.

Other Players on Placement: