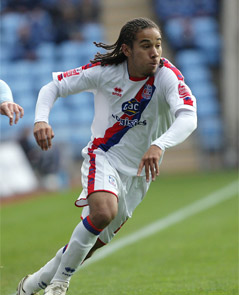 After signing for Crystal Palace in the summer of 2007, Sean Scannell was quickly rewarded for his football progress by then Palace Manager Neil Warnock who handed him his first-team debut at QPR in December of that year.

Scannell went on to make a further 25 appearances that season as he became a regular first-team squad member.

He continued in the same vein during the 2008–09 season and it came as no surprise when he was named as the ’Championship Apprentice of the Year’ at the Football League Awards.

Speaking at the time, Warnock said of the youngster:

I just feel that he has achieved everything he possibly could, he shows his dedication and willingness to learn, he has got that freshness about him and I have been delighted with the contribution he has made to my squad.”

While operating as a right-sided winger or forward for Warnock, Scannell was also showing the same versatility towards his studies which were juggled to allow him to get through the full ASE framework.

The achievement of which was all the more remarkable considering that his form for Palace had led to his inclusion in the Republic of Ireland’s Youth and U21 squads during this same period.

During the 2009-10 season Scannell, once again a mainstay in the Eagles starting eleven, hit the political headlines after appearing as part of an Apprentice delegation of footballers who met then Prime Minister, Gordon Brown to celebrate modern Apprenticeships at a glitzy Downing Street bash.

This term has been a frustrating one to date, with the youngster yet to make a competitive appearance due to an injury sustained in pre-season.

However, despite this inactivity his long-term value at Selhurst Park was perhaps underlined by the Club offering him a contract extension in October.