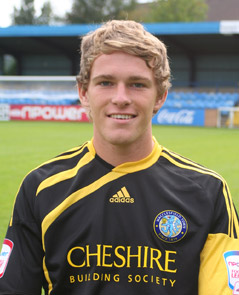 Former Macclesfield Town Apprentice Max Lonsdale is hoping to earn a deal with another professional club after producing a fifteen minute video of his best moments from last season.

Released by the Silkmen in May, Lonsdale’s video has already attracted the attention of Premier League Champions Manchester United with Sir Alex Ferguson handing the player a trial during pre-season after being impressed by what he saw.

The midfielder spent three weeks at Carrington with United’s second string. During that time he featured in four matches and while impressing Reserve boss Warren Joyce with his attitude it was ultimately not enough to earn himself a dream move to Old Trafford.

“Max did well while he was here. While he was a player we were already aware of it was well worth a second look. He’s neat and tidy on the ball, passes it well and has a decent shot on him.”

“It was always going to be tough for him with the competition we’ve got here. The likes of Ryan Tunnicliffe and Paul Pogba are coming through from last year’s youth team and there are one or two others pushing to get themselves in the senior squad.”

Doncaster Rovers have also shown an interest in the youngster and he is hoping for a further chance to show what he can do.