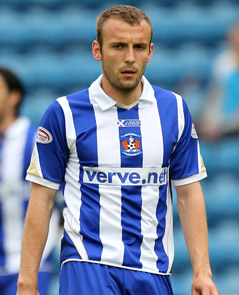 Liam Kelly’s dream of becoming a professional footballer was nearly over before it started after he was one of several apprentices to be offered a professional deal by MK Dons only for the club to renege on the offer at the final minute.

Despite the initial trauma of this experience Kelly bounced back with an eye catching display at LFE’s 2008 Assessment Trials which led to a trial and then the offer of a contract at Kilmarnock.

He made his debut for the club during the 2009 – 10 season and now two years on from his move to Rugby Park, Kelly has cemented his place in the Killie line-up under boss Mixu Paatelainen with a string of industrious midfield displays.

And with the youngsters performances going from strength to strength it was no surprise when he was recently offered a new two-and-a-half year deal which will see him stay north of the border until 2013.

“I’m delighted. As soon as he (Mixu Paatelainen) came to me about extending the contract, I was more than happy to do so. Hopefully over the next two-and-a-half years we will take the club forward and I will improve as a player,” said Kelly.

Yet despite his progress on the park Kelly is adamant that he will not erode the good work he started on his apprenticeship programme and has already committed to undertaking an Sports Science degree through the Open University.

“It’s just a case of planning for the future and staying one step ahead while you can,” he added.