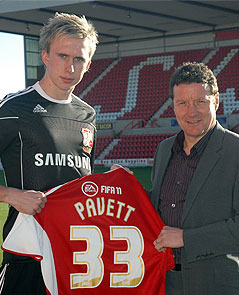 Jordan Pavett was released by Colchester United in the summer of 2010 but was given the chance of football redemption in January after beating off more than 3,500 players to win a professional contract at Swindon Town.

After undergoing regional and national trials he lined up in the final trial at the County Ground last month and was one of three players selected to train with the Wiltshire Club.

And he believes that the rejection he encountered last May only made him more determined to succeed at a second bite of the cherry.

It helped me being at Colchester as an Apprentice as I’d already had little tastes of what first-team football is all about,” said Pavett.

“I didn’t get a contract there as I was told that I wouldn’t dislodge either of the first-team forwards but it made me so keen to prove them wrong,” he continued.

“The Manager (Danny Wilson) called me to tell me I’d be joining the Club as a professional. He told me he’d already spoken to Colchester about me and had heard good things and I really didn’t know what to say. I started welling up, as it was just such a relief.”

Pavett, who was a plumber with his dad’s firm while working as a part time football coach, will now relocate to the Swindon area to pursue his football ambitions.

“The Club have agreed to help me out with digs as long as I need them.”

So the plan now is to get my fitness up to the required standard and try and break into the first team this season. I can’t wait to get started.”