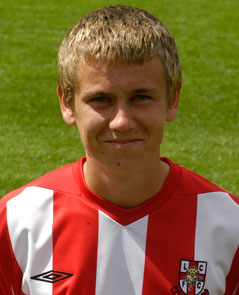 After two years as an Apprentice at Lincoln City, midfielder Jack McGovern was released by the Club at the end of the 2007–08 season.

Despite his obvious disappointment, the news of his release put things into sharp focus and he soon started planning for a secondary career away from football.

Thinking about his options McGovern recalled the exposure he’d had to the plumbing and heating industry via a friend of the family and soon decided that this would be his route away from football.

Three weeks after the expiry of his contract with the Red Imps, McGovern was heading in a new direction via an Apprenticeship with Aaron Services, a company that has offices across the East of England and specialises in the installation of new heating systems and the servicing and maintenance of systems in around 50,000 homes throughout the East Midlands, Lincolnshire and East Anglia.

Now well into a programme that will see him become a fully qualified Gas Heating Engineer, McGovern combines his work placement with Aaron Services with day release attendance at Lincoln College where he undertakes further theoretical and workshop learning in topics such as key plumbing principles, common plumbing processes, cold water systems and electrical supply and earth continuity. “While I love football it became apparent that I needed to make some decisions about a future away from the game. I’ve always been a hands-on type of person so this opportunity was one I jumped at. I’ll now hopefully come away with new qualifications that will set me up as a Gas Heating Engineer.”

It feels like I’ve landed on my feet with this opportunity but I would urge all Apprentices at Football Clubs to starting thinking about the ‘what to do next’ question, just in case.”