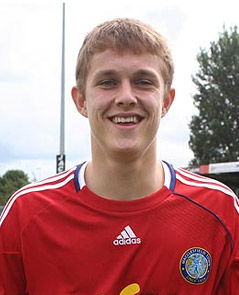 Goalkeeper, Jack Cudworth signed for Preston North End in the summer of 2007 and spent two years at the Club before being told that he would not be offered professional terms at the end of his Apprenticeship.

A local lad from nearby Chorley, the decision hit Cudworth hard, but far from being dejected by his experiences at North End he was able to turn negative’s in to positive’s and set himself the objective of playing at a good non-league standard with the aim of someday getting back into League football.

An affable individual Cudworth was welcomed back to North End in a coaching capacity working with the Club’s Centre of Excellence goalkeepers but it was as a player that he determined to succeed. So, combining his coaching duties with playing, he made the move to the Welsh Premier and made significant contributions for Welshpool and Rhyl which ultimately paved the way for a move to Macclesfield Town this summer.

“I played 33 times in the Welsh Premier, and about half of those appearances were for the reigning champions so I’d like to think I made a success of it. Greg Strong (Manager) had massive faith in me at Rhyl, it’s not often Managers have faith in 19 year old goalkeepers, let alone make them the number one but I’d like to think I repaid that,” said Cudworth.

“I’m pleased to be back in full-time football, but that’s not to say I didn’t enjoy it at Rhyl and to be honest there’s every chance I’d still be there but for off-field problems that meant we were relegated last season. After finishing sixth and being in contention for Europe for a long time it was hard to take.”