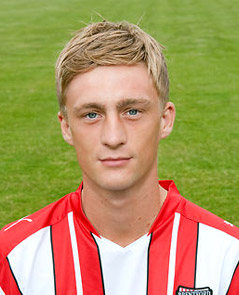 Fraser Franks graduated from Brentford’s Apprenticeship programme in the summer of 2009, signing a one year professional contract with the Club.

Thrust out on an early season loan to Blue Square South side Basingstoke, the young defender spent two months at the Camrose before returning to challenge for a spot in Andy Scott’s first-team.

Originally hoping to use this time as a springboard to success at Griffin Park, Franks still found opportunities hard to come by. And with the Club’s impressive home form keeping them in the higher echelons of League One for much of the season he was unable to make a break-through failing to make a single appearance for the Club’s first-team.

With Andy Scott deciding that Franks didn’t figure in his plans for the following campaign the Club decided against activating a clause in his contract to keep him for a further year however Franks’ stint at Basingstoke had not gone un-noticed by AFC Wimbledon boss Terry Brown who was happy to add the central defender to his Club’s squad as they went full-time in the summer.

He said: “Fraser ticks a lot of the boxes. Sometimes as a player you have to take a step backwards to go forward. We’re only running with 18 players this season, we’ve only three centre-backs and as you can see already Fraser is proving himself very capable of operating at this level.”

Proving that you can step up from youth football to senior football is the biggest challenge that faces any young player but Franks feels that he is now well equipped for the Conference.