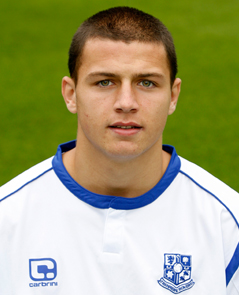 Tranmere Rovers youngster Dale Jennings tremendous strides while on ASE were recognised on 20 March in London when he was named as the League One Apprentice of the Year for 2011.

Jennings beat off competition from MK Dons’ George Baldock and Southampton’s much fancied Alex Oxlade-Chamberlain to scoop the award which is given for all-round excellence and hard work both on and off the pitch.

Yet when Jennings started on ASE in the summer of 2009 few would have predicted that this would be how his story went. Jennings had been released by Liverpool when 15 and although Tranmere had taken a chance on him even they were concerned that the player had disengaged from the education system.

Starting on the Btec First Diploma, Jennings got back in to the swing of things in the classroom and at the same time his performances on the pitch meant that he was playing regular youth and reserve team football as a first-year Apprentice.

This season Jennings continued his development and by September he was a regular in Les Parry’s first-team. With bags of pace and trickery as well as the odd spectacular goal like the ones scored against Bristol Rovers and Plymouth Argyle, Jennings’ League One Apprentice of the Year Award could not have been more deserved according to Rovers boss Parry.

“This is a great achievement for Dale and it goes to show the hard work he has put in over the last two years,” said Parry.

“He deserves to be congratulated on it”.

I think it also reflects on what a fantastic job our youth department do. The award is about development. It is about taking in someone – in Dale’s case about two years ago – and working on the raw material”.