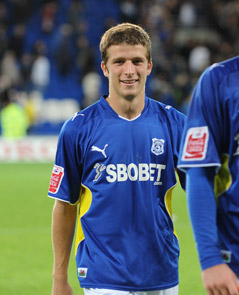 Having had a taste of first team involvement as an unused substitute at Charlton Athletic (away) during the 2008–09 season, Adam Matthews was keen for more of the same and the teenage full-back did not have long to wait in 2009-10.

After an injury to Paul Quinn (at Blackpool) on the opening day, Matthews made his debut for Cardiff City on the second weekend of the season. Cardiff City boss Dave Jones subsequently elevated the youngster in to his first eleven on a regular basis and he caught the eye with a goal at Watford and an impressive display when faced with a head to head against current England international James Milner in the Carling Cup tie at Aston Villa.

Speaking after the encounter, Jones, who had been keen to see how far his young protégé had developed, said; “We knew 12 months ago that we had a player in Adam, the question was how quickly he would progress. I said to Adam before he went out: ‘Let’s see how far you’ve come.’ He’s been talked up well in Wales…and he’s played against a top, full international player and he’s done well against him.”

His rapid progress has not gone unnoticed at international level either, currently captain of the Wales U17’s, Matthews had been earmarked to make his debut for Brian Flynn’s U21s against Bosnia-Herzegovina last month until an injury sustained during a 4-0 win at Watford ruled him out.