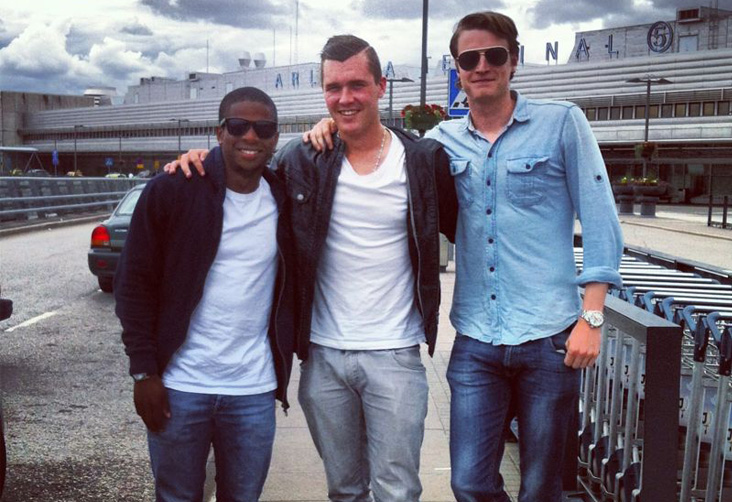 Today me and Adam are travelling back to Sweden from Manchester airport, and although it is a journey I’m slowly but surely becoming accustom to, it doesn’t make it any easier or more enjoyable!

I’ve had a lovely ten days at home, catching up with my friends and seeing my family but I’m eager to get back to playing because of the way we ended the first half of the season. As you know, less than two weeks ago we travelled five hours to Umea to play Spoland Vannas – this was a massive game and one we couldn’t afford to lose if we wanted to go back to the top of the league.

Travelling up to Umea was far from ideal preparation for such a big game, but we also had a couple of important players carrying injuries which didn’t help. With all that being said we didn’t start the game very well and found ourselves 1-0 down within five minutes. It’s a rare occasion for us to go 1-0 down or even behind in a game and its always a shock to the system when it does happen, because we’re normally the ones that score first. Unfortunately late in the first half Adam was struggling with a thigh injury he had been carrying for a while and Benny made the decision to take him off.

We came out for the second half knowing that we were more than capable of turning the game around and getting three points. We needed to grab the game by the scruff of the neck, roll our sleeves up and fight for everything from the get go. And for a period of time we did just that, and were the dominant team but one momentary lapse in concentration cost us and we were 2-0 down after roughly sixty minutes.

This was a body blow but to our credit we kept playing football and were reward for our efforts with a goal from Benny, which put us right back in the game. With the wind in our sails we continued to put them under pressure and we looked like we were going to score our second goal. To our disappointment this didn’t happen, and we conceded a third and final goal to end all hope of getting anything from the game.

As anyone who knows me will tell you, I hate to lose at anything but going home after losing 3-1 didn’t feel right and I wished we had one more game to play before the break to put things right. I’m sure this feeling was shared by my team mates but as our Manager reminded us, we have eleven games after the break to put things right and we were only one point behind Ostersund and Spoland Vannas. This break has given us the chance to have some much needed rest and recovery, something our squad as a whole was in much need of.

We have two new lads from the LFE Player Placement programme arriving on Monday, two defenders which will add some depth and additional quality to our back line. I hope we can start the second half of the season as we started the first and get off to winning ways on the 27 July.