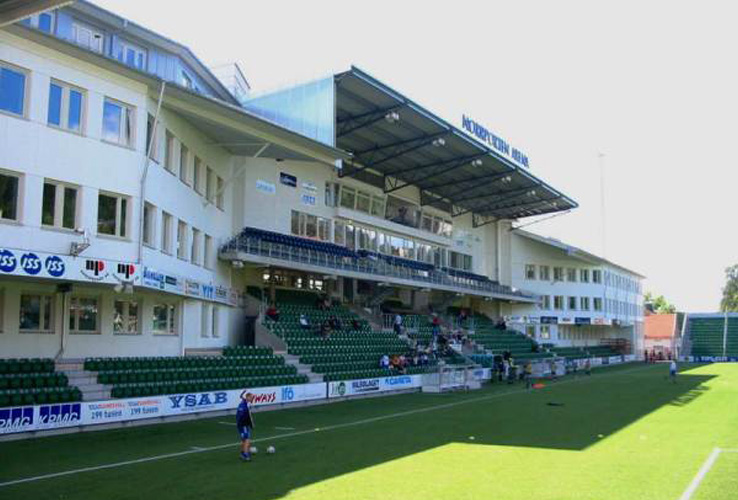 On Saturday, as a team bonding exercise the Manager had organised for the whole team to go and watch GIF Sundsvall’s first game after the break. Though not everyone in the team turned up, it was a first for the new LFE boys and a chance for them to see what the standard of football is like in Sweden.

Luckily we got more than we bargained for, as it was one of the most entertaining games I’ve ever seen, with five goals in the second half. The game eventually finished 4-4 but it was a game GIF Sundsvall really should of won because they were 3-0 up at half time and were by far the better team.

However like us this season, lapses in concentration cost them and with ten minutes to go, it was level at 3-3 with the other team pushing for a fourth. To Sundsvall’s delight and our surprise they dug deep to score a goal which they must have thought was the winner with four minutes to go till the end. I know the feeling well, when you just want the referee to blow the whistle but it doesn’t come soon enough!

Gais, whose fans had travelled eight or more hours to watch the game, weren’t to be disappointed as their team scored a fourth and final goal in an eight goal thriller.

The day after, we played our first game back after the break. It was against a local team that we’d beat earlier in the season, and although it was a friendly it’s always good to play as much football as you can before the league starts again.

It was nice to get back playing and it was the first chance for the new LFE players to play with the team. They both did well considering it was their first game since they left their previous clubs, and I think they will play an important part in our success in the second half of the season. Unfortunately we drew 2-2, but we dominated the game from kick off and had numerous opportunities to finish the game.

We can take many positives from the game going forward, and hopefully when we get the opportunities on Saturday against Spoland Vannas we can take them. Saturday’s game, is the biggest of the season so far because if we lose we could be in fourth at the end of the weekend and four points behind with ten games to go. It’s a game we cannot afford to lose, but we haven’t lost at home in over two years which will gives us the confidence to go and play and express ourselves.