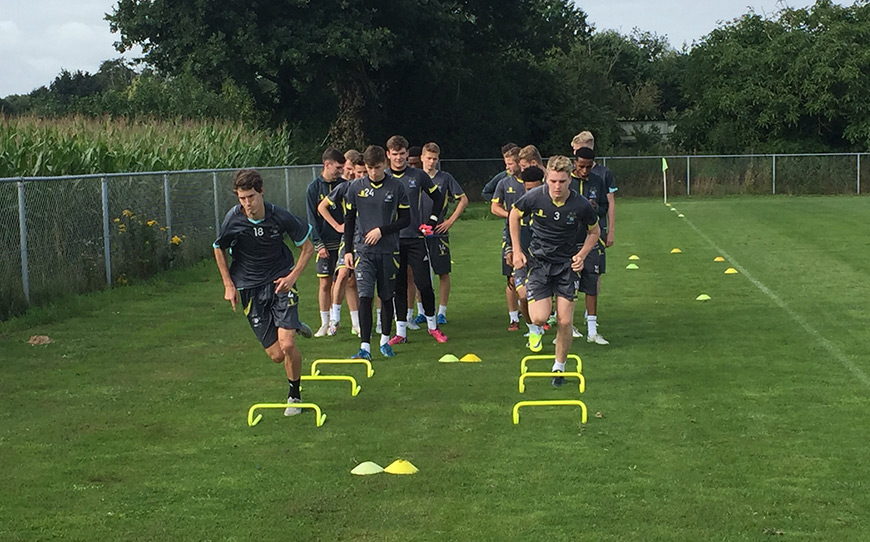 Where to start. So much has happened since my last post.

First thing worthy of a mention is our practice game against Middlesbrough, a club famed for producing young players and the type of club the current academy (We’re in different categories) doesn’t allow us to face on a regular basis.

It’s was a tough game and we were a little slow out of the traps meaning they dominated possession and we got a half-time roasting from our coach Ryan Kidd. That intervention redressed the balance somewhat. We started pressing higher and higher up the pitch and retaining the ball when we retrieved it.

Unfortunately Rowan (Kimmins) had a bit of a shocker setting-up Boro’s goal which proved decisive but there were still plenty of positives to take from the game and it reminded us all that we aren’t that far away from the likes of our opponents.

The highlight of our evening was a Bury’s Got Talent event where we paired up with our room-mates to perform a song, impression and a trick.

It was a good laugh and the players and staff enjoyed an evening that will live long in the memory. Jamie (McCarthy’s) rendition of Ben E. King’s, ‘Stand By Me’ was truly memorable.

Last Thursday saw us work with the VVV Venlo coaches. That session was very technical and worked primarily on passing and receiving a ball. I thoroughly enjoyed it and learnt a lot from the coaches, I hope our staff integrate some of the drills into our training when we return to England.

After resting and refuelling we did something that the Dutch call a total skills session. This involved learning intricate touches, turns and movements which are designed to make players more efficient dribblers and better at playing in tight areas.

With the effects of the week taking their toll the staff decided to let us have Friday off so that we could recover ahead of our fixture with Vitesse Arnhem last Saturday. That was a game we acquitted ourselves well in but contrived to lose.

The weekend also saw us visit Amsterdam to watch the Johan Cruyff shield match between FC Groningen and PSV. Before the match started we were took on a tour of the Amsterdam Arena to get a good feel of the stadium and where the players walk, do media conferences, get changed and park their luxury cars.

We started the tour in the central reception where all the V.I.P’s go to pick up their tickets. There were numerous escalators to take you up to either tier of the stadium. We then got shown to the top tier of the ground where we could really see the scale of the place and around 50,000 brightly coloured seats. Then it was down to the dugout and some extremely comfortable seating – this is probably one stadium where I wouldn’t mind sitting on the bench all season and collecting a pay packet.

Also from here you could see the automatic roof which was controlled by the home team and could be opened and shut when they feel necessary.

The tour guide told us how much a season ticket is for the season at the Amsterdam Arena and I was pleasantly surprised – it was just two hundred and fifty euro’s. You can’t even go to watch the likes of Bolton play for that!
After watching the game that finished 3-0 to PSV our attention switched to a game scheduled for Tuesday (tomorrow) against Bochum.