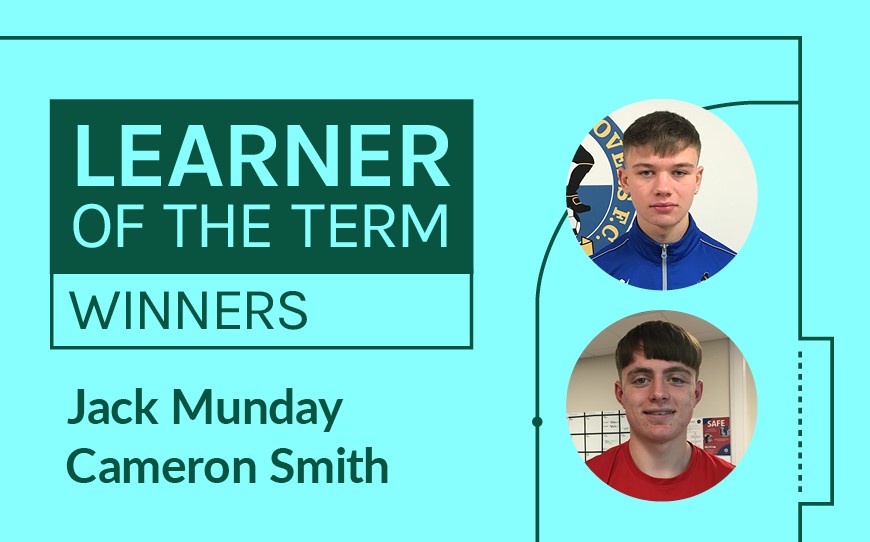 LFE’s Learner of the Term celebrates the efforts of students who have made excellent academic progress and a positive contribution at their club. On this occasion, two winners are sharing the prize, each earning a certificate and a £150 Amazon voucher.

Jack has displayed tremendous resilience and determination to make an outstanding start to his studies at Bristol Rovers.

In addition to his successful academic profile, Jack has committed to volunteering for the club’s Community Trust and has been a great role model to his disabled twin brother.

“He has a twin with a disability and provides a lot of help for him at home and out and around the local area. Jack’s twin brother is also studying for a BTEC Level 3 in Sport but at a different college. His brother is struggling socially at the college and it is affecting his work, so Jack spends time helping and guiding him through his work outside of college.

“Jack’s mother is also spending a lot of time travelling around dropping off the two boys at various college campuses and this affects Jack’s attendance. However, this has not had an impact on his work quality. If Jack needs to stay late to complete a piece of work or complete at home, he makes sure he gets it done to a very good standard.

“He has also volunteered for our Community Trust to coach at our ‘Fun Days’ for children aged 5-13 and has shown great maturity and patience with the younger children. He is also polite and considerate around the college to staff and other students.

Having been unhappy with his previous situation at a neighbouring college, Cameron showed great initiative to independently contact Fleetwood Town about joining the programme.

Despite starting three weeks later than everyone else, he wasted no time in catching up with the other learners and has been a mature influence in lessons and training.

Senior Lecturer Laura Went told LFE: “After getting to know Cameron and speaking to his old school, we learned that Cameron’s dad died in his last year of school and he didn’t engage at all and missed the majority of lessons.

“His attendance issues came as a shock to us as his attendance here has been exceptional. Following the death of his father, he manages to cope well and give 100 per cent in everything he does.

“Cameron’s grades in his first four units have been to distinction level and his overall work rate in class has been brilliant, where he has shown resilience and has overcome adversity.

“Not only has Cameron been exceptional in training and in education, he has spent time volunteering at school recruitment events, college open days and giving up his own time to help out with refereeing the local school games, highlighting his leadership qualities and developing his communication skills.”