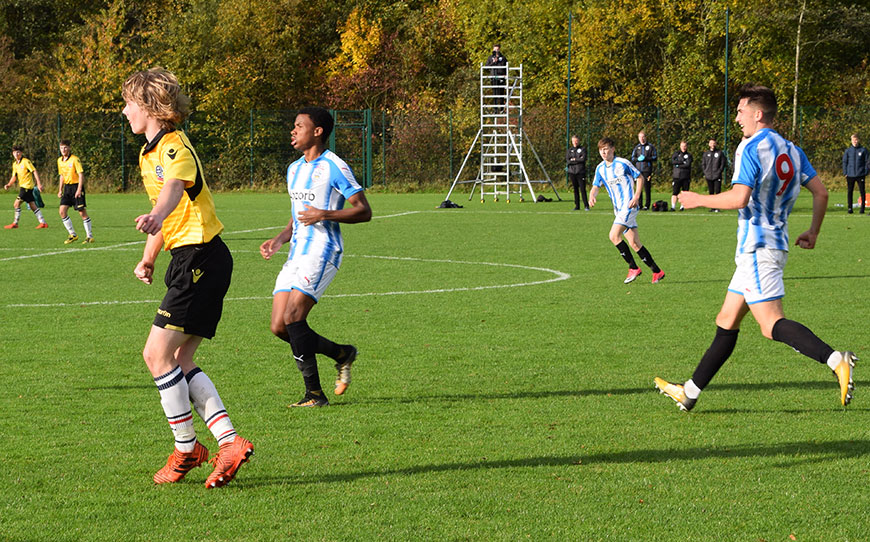 Wanderers held an early two-goal advantage but found themselves 4-3 behind with 20 minutes remaining, only for Sunny Graham to equalise before Connell’s 81st-minute winner.

It took just six minutes for Bolton defender Ted Moulden to put the visitors in front with a header from a corner, but they were pegged back just four minutes later when Dom Tear converted a curling left foot shot from the edge of the area.

However, the Trotters quickly established a two-goal lead with 16 minutes on the clock through a Luca Navarro penalty after a handball, followed by Matthew Argent-Barnes’ composed finish as he latched onto a long ball.

The two sides have been entertaining to watch this season, producing plenty of goals and conceding almost just as many and that trend continued as the Terriers halved the deficit after half an hour when Captain George Danaher nicked the ball off keeper James Aspinall and poked the ball into the open net.

And parity was restored before half-time after Micah Obiero’s smart turn saw him peel away from the Wanderers backline and slot home from the angle to complete a frantic first half.

Both teams seemed more resolute after the restart and it took 25 minutes for Huddersfield to break the deadlock and go in front for the first time in the match, with Matty Daly remaining calm within a goalmouth scramble to produce some nifty footwork and place a shot into the bottom left corner for his sixth goal of the campaign.

Bolton made a swift reply though and almost got back on level terms from Barnes’ long-range effort, but his strike cannoned off the post and away to safety.

The Trotters continued to search for a leveller and substitute Graham made the required impact by pouncing on a rebound after a superb initial save from Luke Mewitt.

And Nicky Spooner’s side snatched the three points with nine minutes to spare when Mewitt came off his line and parried the ball under pressure into the path of Connell, who looped his header over the Terriers stopper and into the net.

Wanderers Under-18s manager Spooner told LFE: “It was a crazy game today, we’re doing it week in and week out – scoring so many goals but conceding just as many.

“We’re learning and we know young players are going to make mistakes. In a sense I’m happy – it can be seen as a learning curve.

“We were two goals up and comfortable but we knew we were going to concede goals, at the minute that’s just how things are going. In the end we got there though, it was a good and probably deserved win.”

Meanwhile, Huddersfield’s Under-18 boss Leigh Bromby said: “With the ball I thought we were dominant and created a lot. Bolton were going very long and direct in the way they played today and we were just caught out.

“But the players will learn about that and how to deal with the long ball, it’s something that they will pick up.”