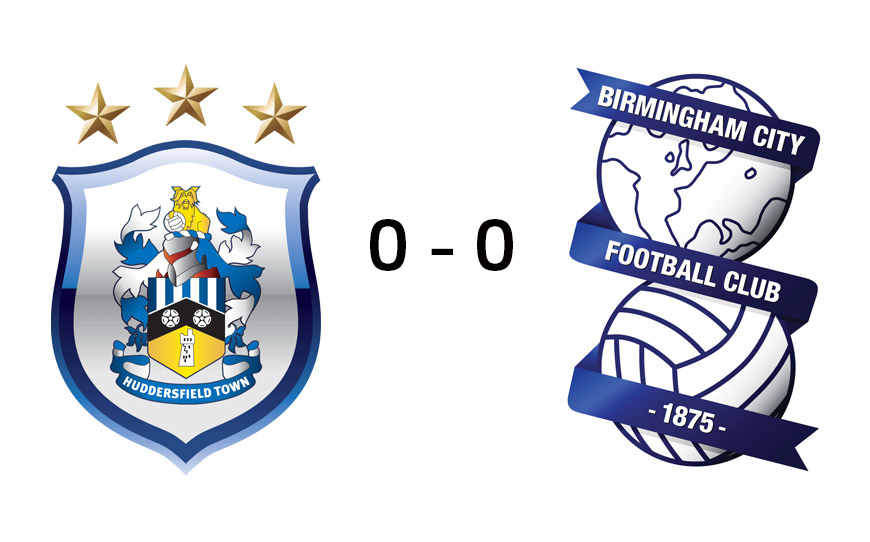 By Seb Gigner: A stunning strike from Huddersfield’s Dom Tear that cannoned away off the crossbar was the closest either side came to breaking the deadlock in a 0-0 draw at Canalside on Saturday.

Both sides had opportunities to score but Birmingham were probably the happier of the two teams after a solid defensive display helped them to end a three-game losing run.

A crucial block from several Birmingham defenders denied Cedwyn Scott an opening goal in the 18th minute. The Blues defended deeply and looked to counter but that plan was nearly undone in the 27th minute.

Tear swivelled in the Birmingham area and smashed a powerful shot against the underside of the crossbar. The bar rattled but the ball failed to cross the line and the visitors escaped.

Huddersfield goalkeeper Ryan Schofield was called into action at the start of the second half but the hosts remained most likely in attack and substitute Alfie Raw was denied a late winner as his effort was smuggled away from goal.

Birmingham coach Steve Spooner was happy with his team’s showing in defence and attack and suggested that better things are round the corner.

“Defensively we were very well organised, we looked very solid and I was very pleased with the team performance,” he said.

“You have to keep thinking that these things will turn around, other years these chances have gone in, this year they haven’t. It’s all about players doing well individually and within a unit, that’s what our youth development programme is about, getting players through to the first team.”

Huddersfield Town coach Tony Carss credited the visitor’s for their strong defensive display but conceded he wants more from his players as an attacking force.

“Birmingham have come and defended really well, they sat in a deep block. We had to defend in the second half, and we stood up well against them reasonably well,” Carss said.

“We just need that little bit of quality in the moment, being clinical, being ruthless. It’s just a case of making more of our chances next week when they come,” he added,