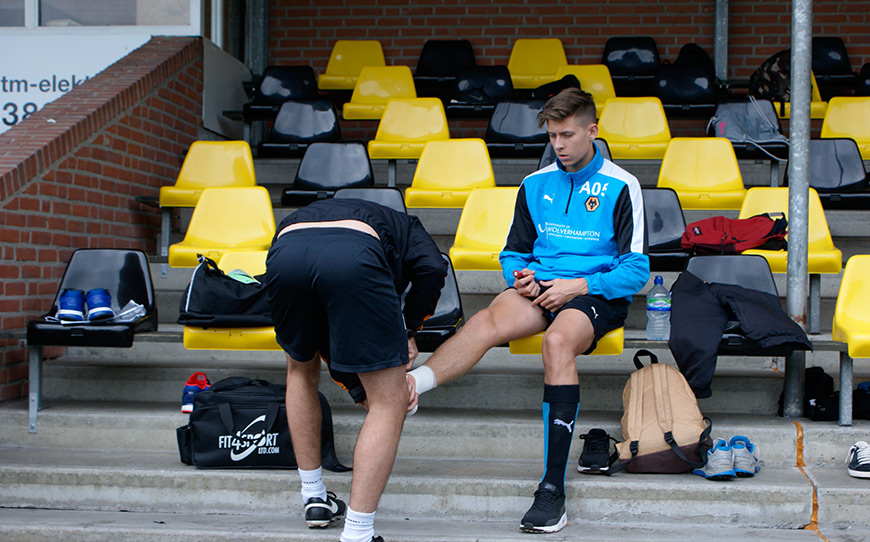 It was a cold, wet and windy morning in Wolverhampton, when we met for an early departure. When the bus finally arrived the group all stepped on with excited faces.

We were set to arrive at Birmingham international at 9:30 and the bus got us there safe and on time.

Although the plane was delayed around an hour, we kept in good spirits and we arrived at Amsterdam later on. The flight was good and everyone was well-mannered on the plane – we have been at all times, so far!

We were greeted by a young guide who showed us the way to the bus. The bus journey was great and even though it was only for an hour everyone was asleep within 10 minutes.

We arrived at the De Ruwenberg hotel and it really lived up to the standards we were expecting. It is fantastic and we have all had a warm welcome from the staff.

After being shown around, we then got ready for training and got acquainted with our bikes on which we had to cycle to and from training. It created a good atmosphere among the players and staff and helps us get to grips with the Dutch culture a bit more.

After a 10 minute cycle we arrived at wonderful facilities for training and were also greeted by some very friendly locals at the training pitch.

The surface was of a fantastic standard and did not disappoint!

We walked down to a huge selection of food that tasted delicious; each player was begging for seconds! All the salad was fresh and was all gone at the end.

We then got some free time to use the facilities in the complex. Some of us decided to go to the pool and do a recovery session to keep our legs fresh for the 2 weeks. We did stretches in the cold pool to help the muscles and then used the sauna – we felt really good afterwards; the facilities were outstanding.

Day 2 and the Netherlands heat lived up to the expectations on a sunny Tuesday morning. The clock struck 8:00 am and anyone who turned up a minute after were late.

The breakfast was delicious and our sports scientist approved!

After the exquisite breakfast we were then told to report downstairs at 9:45 to leave for a newly arranged match vs Rochdale. As we had a bit of spare time we went for a game of table tennis and also a swim to wake ourselves up!

Again we cycled to the training pitch on our bikes and when we arrived we prepared for our game. It was very good to get some fitness out of the game as well as improving our technical and tactical sides of the game.

Following the game we returned to the hotel and we immediately had lunch to refuel ourselves again.

After that we all went to the pool to do a recovery session where we all utilised the pool facilities to help us get any tightness or muscle pain out of our body. The hotel staff were really supportive and brought us down bottles of water to help; it was really thoughtful.

The pool session was a great benefit to everyone and we all felt a lot better after it.

During our free time we decided to make the most of it. We went for a bike ride to the village to which we were greeted by all the people in the shops, who asked us a lot of questions about England and football. So we immediately had a positive welcoming into the village!

We headed back to the hotel at 5. We still had a few hours of free time, so we set up the ps4 downstairs and enjoyed a couple of games of FIFA. Some were better than others!

Soon enough it was then time to eat again and we enjoyed some food.

After that we had analysis and reviewed our performances via video recordings. That lasted for about 30 minutes but just before we headed off to bed a few of the lads went for a game of head tennis on the courts, where we enjoyed a great deal of banter and competitiveness!