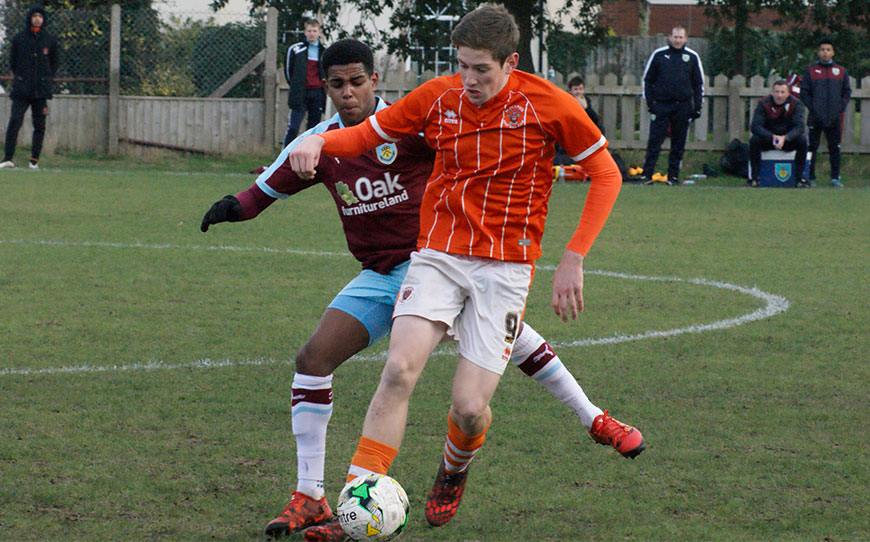 Blackpool and Burnley contested a feisty goalless draw at Lytham Sports Club on Saturday in the North West Youth Alliance.

Both teams had managed just five clean sheets between them all season, but neither side were able to produce a winning goal in this encounter.

The Tangerines almost opened the scoring within seconds of kick-off as Burnley centre back Lewis Norvock gifted possession to Rowan Roache just outside the penalty area, but his left-foot shot flashed past the post.

It was Pool’s turn to make an error after 13 minutes when keeper Jack Sims struggled to clear after an untimely bobble, but Tinashe Chakwana’s lob went straight in the hands of the Seasiders stopper.

Tempers flared, with Elieu Njie fortunate to escape with just a booking following a two-footed tackle and he was joined in the referee’s book by Blackpool full-back Macauley Wilson, after a similarly robust challenge.

“I spoke to our lads at half-time because two of them got booked in the first half and I said to them those kind of tackles are unacceptable,” Donnelly said.

“Part of being a youth coach is educating your players and while they make mistakes, hopefully they’ve learnt that we don’t condone that kind of stuff. The first one, we wouldn’t have argued if the referee had have sent our player off.”

Blackpool were edging proceedings and an in-swinging corner by Roache caused a scramble in the area before the ball fell to James Doyle, who stabbed it wide of the target. Donnelly’s side continued push forward and Kit Gregory volleyed over the bar from the edge of the area.

“It’s not something that you see much actually in youth football,” said Burnley Under-18 assistant coach John Townson. “I don’t think any of the challenges were malicious. It’s just over exuberance I think.”

After the restart, an error by Njie allowed Chakwana another opportunity as he ran in behind the last line of defence, but his left-foot attempt was easily collected by Sims.

Burnley had to soak up more pressure when Anthony Cato headed wide after another Roache corner, before Wilson teed up Richards inside the area, but the full-back fired over.

Pool continued to threaten the resolve of the Clarets defence and a poor clearance from keeper Tony Aghayere left him stranded out of his goal, but Gregory’s speculative strike from 40 yards out went narrowly over the bar.

With 15 minutes remaining, the introduction of Tommy Wood and Tundi Bayodi provided Burnley with some fresh legs. Wood instantly made a nuisance of himself by powering through the defence after latching onto a goal kick but his effort on goal lacked the power to beat the keeper.

Both teams had their share of possession in the closing moments, but the best chance fell to Blackpool skipper Wilson in stoppage time.

Roache reached the byline on the right flank and hit a low cross towards the near post but Wilson was unable to make enough contact on the ball to score.

“It was quite a scrappy game to be honest,” Townson said. “The pitch wasn’t the greatest. We asked the lads for the first 10 minutes to win the headers and tackles and second balls and grow into the game and I think we did that.

“Every man put a shift in and worked really hard. They did what was asked of them and unfortunately we couldn’t quite find the goal.”