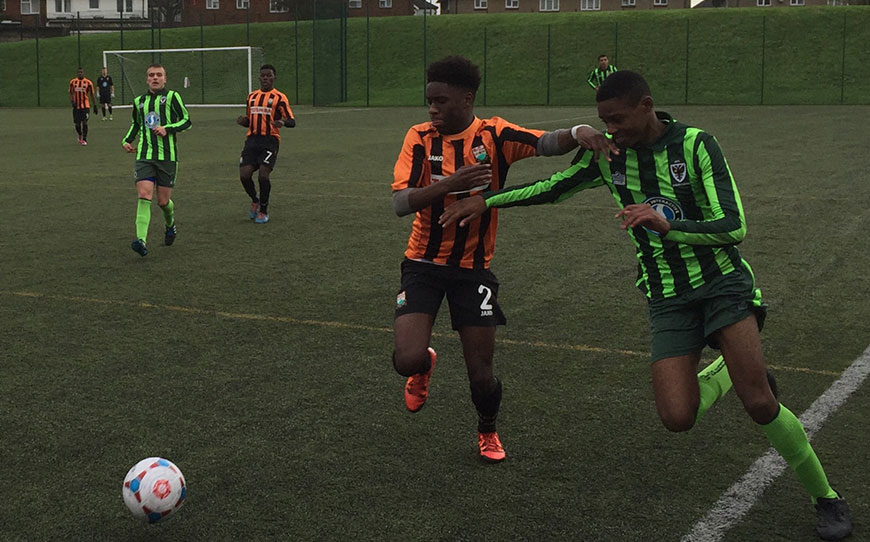 By Gavin Willacy: A remarkable goal from the halfway line by central midfielder Anthony Hartigan in injury time sealed a surprise but deserved win for a young Wimbledon side away at Barnet on Tuesday morning.

For this previously postponed game, played on an artificial pitch due to the sodden conditions of the grass surfaces at The Hive complex, Wimbledon sent a mainly Under-16 team as their Under-18s were on their way to Newcastle to play in the FA Youth Cup on Wednesday evening.

They showed exactly why they are top of the South-East Under-16 table, beating an older Barnet side who were also without two scholars on first team duty while four others were not fit to play.

While Barnet dominated for some spells, they failed to show the composure in attack required to make the breakthrough and could have gone behind in the first half on several occasions.

After the break, Barnet looked livelier and went close twice. A penalty appeal was turned down three minutes into the second period and on the hour mark the impressive Tobi Coker hit the inside of the post.

Having missed a one-on-one opening, the young Dons then went ahead on 72 minutes. The catalyst was playmaker Louie Stanton-Cockle who orchestrated a flowing move from left to right.

The ball was worked to substitute Reggie Young on the right of the box and his shot sneaked past the Bees’ Under-16 keeper Charlie Busby.

Three minutes later came Barnet’s major opportunity. Ephron Mason-Clark, seemingly trapped in the left-hand corner, showed outstanding skill to flick the ball over his head and that of the defender in front of him, dribbled along the bye-line only to be tripped as he headed towards goal. Cocker took the penalty but his the right-hand post.

Barnet struggled to get any tempo to their game and the game was petering out when, in the final minute of regulation time, Stanton-Cockle broke through, Busby rushed out to claim the ball and took a kick from the Wimbledon midfielder in the face. Busby left the field dazed by the blow, and with all three substitutions made by Barnet coach Dean Selvey, centre-back Joe Payne was forced to go in goal for the final few minutes.

He dealt well with the few attacks that entered the box but was then embarrassed in the third minute of injury time when Hartigan shot from halfway, lobbing the ball over the stranded Payne and into the net at the stadium end.