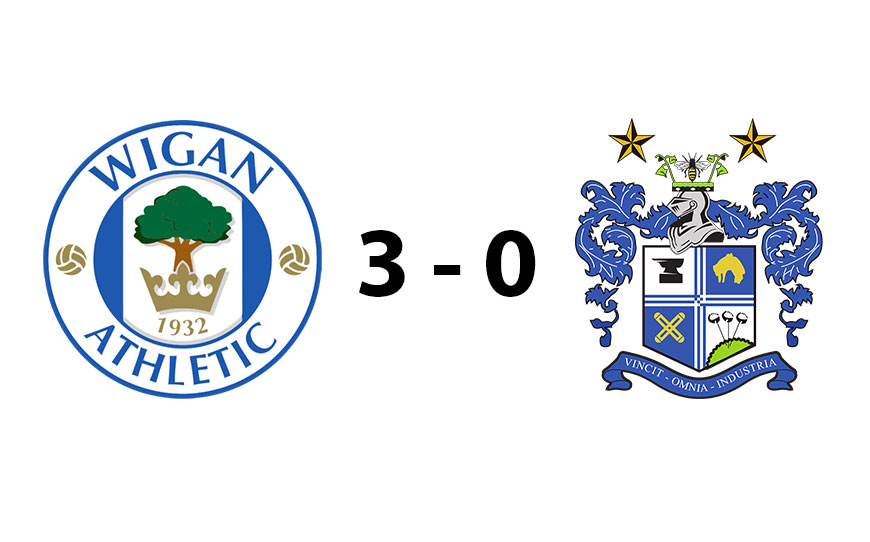 By Niall Concannon: Wigan Athletic Under-18s maintained their nine-point lead ahead of Rochdale at the top of the EFL Youth Alliance North West division following a 3-0 victory over ten-man Bury Under-18s at Christopher Park Training Ground.

Mwiya Malumo’s double and a tidy finish from Jamie Cotter proved enough to steer the Latics to a 15th win from their last 17 league games, dating back to September.

Bury came into the game fresh from a run of four wins in their last five Youth Alliance matches, but suffered a disastrous start when captain Ryan Cooney was sent off after just two minutes for a high challenge on Tylor Golden.

Things went from bad to worse for the Shakers as Malumo’s venomous drive was parried away by keeper Scott Moloney straight into the path of Cotter, who converted the rebound with a neat left-footed finish on seven minutes.

The hosts doubled their lead six minutes later after Charlie Jolley was played through on goal, forcing a good save from Moloney, who was again unfortunate as he diverted the ball towards Malumo, with the striker on hand to slot home the follow-up.

Athletic continued to pile on the misery as Will McGuffie collected possession inside his own half and surged forward before slipping in Malumo, who finished with aplomb to create a three-goal margin before half-time.

However, the scoring finished there thanks to a resilient display from the visitors after the break, while the Latics used their man advantage to cruise to a third successive victory.

Wigan Under-18s coach Nick Chadwick told LFE: “I’m proud of the way the lads went about the jobs we asked them to do and the manner they went about it.

“I thought we gave a terrific performance in terms of professionalism and attitude.”

Meanwhile, Bury academy manager Mark Litherland said: “I thought it was really hard, the lads were up against it playing with 10 men for 93 minutes. But our lads worked their socks off in those conditions. I thought they were outstanding in the second half.”