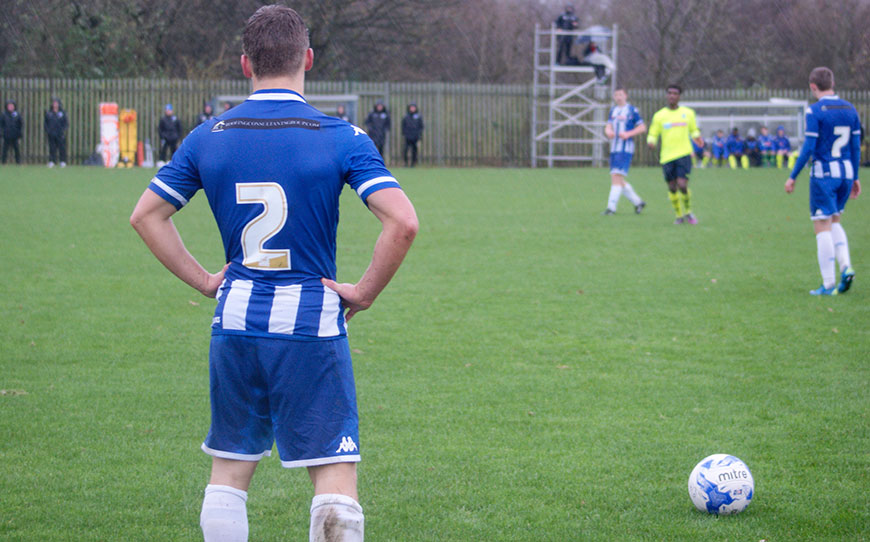 Wigan Athletic Under-18s extended their unbeaten run to five games in the North West Youth Alliance with a narrow 1-0 win against Tranmere Rovers at Christopher Park.

In an otherwise even encounter, Arnold Baxendale’s first-half free kick was enough to give Will Ryder’s side their third successive win to lift them to third in the table.

“It was a tough fixture for us,” Ryder conceded. “Tranmere have tried to set up to stop us playing and credit to them, they’ve limited the amount of chances we’ve created in the final third.”

“I always felt comfortable that once we went a goal up, we’d probably see the game out. Thankfully we’ve come away with the three points and overall are deserved winners.”

The game began at a pedestrian pace with both sides negating any attacking creativity in the opening stages as steady rain became torrential.

It took just over 20 minutes for the first meaningful opening of the game as neat build-up play from the hosts created a crossing opportunity for left-back Alex Lingard. Matthew Rimmer’s tame shot though did little to trouble Tranmere keeper Patrick Rutter.

Wigan persevered though and broke the deadlock in the 25th minute. Full-back Baxendale, drilled a free kick from the edge of the left side of the area that eluded everyone before curling inside the far post.

“Our strikers have been great with the amount of goals that they have scored, but Tranmere have made it hard for us and we have started chipping in with goals from different areas of the pitch,” Ryder added.

“Arnie’s done well to convert his chance there. We’ve done a bit of work on set pieces recently, so it’s pleasing for that to go our way.”

The Latics boast the best defensive record in the league and continued to dominate the early stages of the second-half with Matthew Rimmer and Chris Merrie both going close.

Alex Lingard then had a well-controlled shot on the half-volley tipped round the post by Rutter as Wigan attempted to double their advantage.

Latics keeper Kelland Absalom had been untested with an hour gone and appeared eager to get involved when he was caught in no man’s land having raced out of his area.

Tolani Omotola got to the loose ball first and rounded the keeper, but unluckily slipped at the vital moment with an open net gaping and the danger was cleared.

Rovers were almost made to pay just moments later when Callum Lang brilliantly flicked the ball over Tom Williams, but his finish was too casual with just the keeper to beat as he lobbed over the bar.

The visitors had scored just three goals in their previous six games and continued to struggle against Wigan’s stout defence. Daren Askew who drifted in off the wing saw his left-foot shot roll harmlessly wide of the target.

Askew then turned provider as he teed up substitute Tom Croughan but his shot was deflected wide.

And Athletic were able to clinch their fourth clean sheet in five games to seal the victory that condemns Tranmere to a fourth consecutive league defeat.

“It was difficult,” Tranmere Under-18s boss Andy Parkinson said. “We know that Wigan are a good team.”

“They had a lot of possession of the ball but didn’t really hurt us in the key areas, so the discipline of our players I felt was good. We pressed them high, we won the ball back in the areas that we wanted to win the ball back and we nullified their threat.”

“We just lacked that cutting edge. When you play against a good possession team, you’ve got to make sure that when you do win possession, you keep it and we wasted possession too often,” he added.