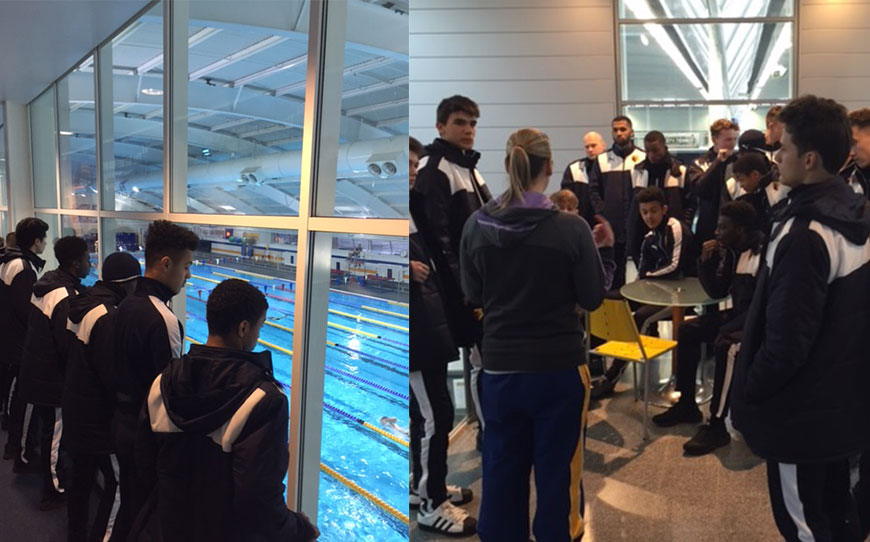 Watford’s Under-18 players recently visited The University of Bath as part of a day based around opportunities in Higher Education.

The squad visited the impressive facilities at the University’s main campus where they were able to watch elite performers in other sports, including Tennis, Judo, Swimming and the Pentathlon in training.

As well as receiving a tour around the University Sports training village, Head of Football, Che Wilson, and academic, James Fern, talked to the players about the benefits of combining academic study, as an undergraduate at Bath alongside competitive University football.

Second year apprentice Max Makaka, said; “Being able to the see the University and the facilities was really helpful.

“I am not sure if University will be my path,but it helped me to understand how a University can develop people’s skills and knowledge. The University really impressed us and the visit helped me to realise I have lots of potential for a bright future.’

His team-mate, defender Louis Rogers echoed those sentiments. He said, “I thought the trip wasn’t going to be that interesting but once we met the staff and saw the facilities, we were all really impressed,”

??“It was really interesting to have the chance to ask questions and see other elite athletes training. It helped me appreciate the hard work they put in, not only in their training but in other areas such as psychology, recovery, strength and conditioning,” added Rogers who studies for A Levels alongside the other academic demands of his apprenticeship at the club.

Head of Education and Welfare at Watford Football Club, Chris Thurston, described the visit as a hugely successful one; “We were really pleased that the group were able to see an elite environment outside of their own sport, as well as learn about opportunities that may be available to them should they not progress on their desired path in Professional Football.”

“We would like to thank the University of Bath, Che and James for their hospitality and information during the course of the day.”

The team were able to take advantage of the University facilities to hold a team meeting and train ahead of their prospective Professional Development League clash with Cardiff City. The Hornets intend to strengthen their links with the University to help players move into HE.