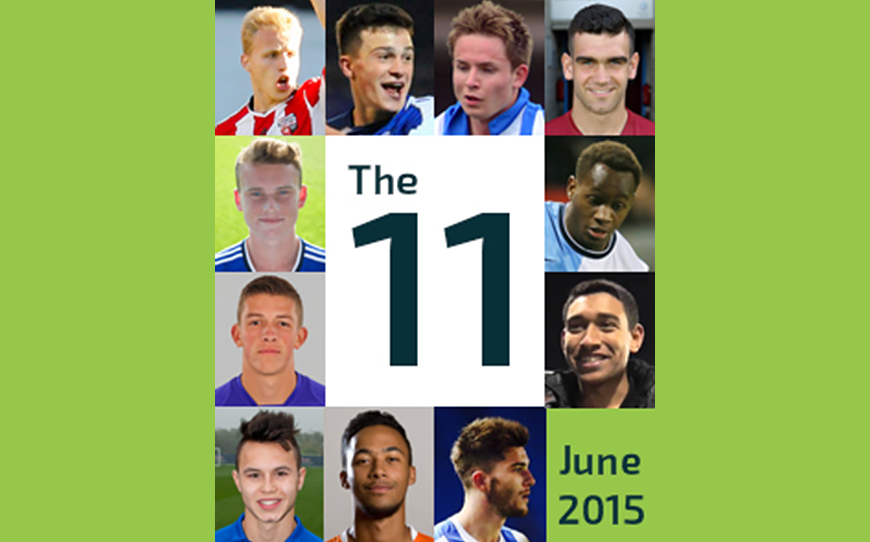 Here’s an in depth look at who made LFE’s XI for June 2015 and why they’ve been included:

One of eight youngsters to have secured a professional deal towards the end of last season, striker George has also excelled off the pitch working to Distinction level on his BTEC Diploma.

LFE regional officer, John Barton said, “George is a great lad and fully merits this recognition. The hard work for him starts in the next few weeks when he becomes a full-time professional but he has every chance of success is he continues to show the same commitment that has taken him this far.”

All-rounder Ryan is at his most comfortable at full-back or occupying a central defensive position though has the versatility, pace and athleticism to fill other positions as required.

Ryan handed a first-team squad number at the end of March and named amongst the substitutes for Rovers’ FA Cup quarter-final replay against Liverpool though he is yet to make a senior appearance.

LFE’s Craig Skinner said, “Blackburn have high hopes for Ryan and he has been a model student this year. He has a quiet manner is always respectful to others and will start the coming season hoping to impress Gary Bowyer enough to earn another first team opportunity.”

Lithuanian defender Audrius finished his apprenticeship strongly featuring for the Bees Under-18s and Under 21 teams on the way to earning a professional contract.

Audrius completed every aspect of his academic programme despite English being his 2nd language.

LFE’s Ian Smithson said, “Audrius has been heavily involved with volunteer work in a range of projects. He has spent time with the Brentford FC Community Sports Trust and he also returned to his secondary school where he was lauded as a ‘great role model’ for the students.

“He has been one of the most active volunteers within the Academy and deserves the recognition of this award.”

Josh has been an excellent apprentice throughout his time on the ASE programme at Brighton but surpassed himself in the last couple of months of the season.

Having been told he would not be offered a contract for next season, Josh reacted positively and decided to aim higher off the pitch. He worked extremely hard to raise his BTEC grades from merits to distinctions and achieved DD in his Diploma, way ahead of his original predicted grade.

Although he continued to play for Albion’s under 18s, fullback Josh also took on additional training aimed specifically at talent transfer opportunities. Having investigated the potential of transferring his strength and power to another sport, Josh spoke with people at UK track cycling and skeleton bob organisations. He is now pursuing that with a view to starting a career in a new sport.

Stockton lad Connor made his debut in Ronnie Moore’s first team on the final day of last season with their great escape from League Two relegation complete.

LFE’s Paul Urwin, said, “Connor worked extremely hard to achieve a D*DD grade profile on the BTEC Extended Diploma. As his football progressed and his time was taken up with training and being around the club’s first team he maintained his focus on his academic work and deserves great credit for this.”

As a first year apprentice Chris became a regular starter in the Tractor Boys Under-18 side and he ended the season with a taste of life in the Under-21’s.

Away from the pitch he has also prospered in his academic work gaining Distinction and Merit grades in his BTEC units while excelling on his NVQ.

“Chris completed a media interview as part of an assessed NVQ session which was graded Outstanding and has produced an NVQ portfolio that so far is one of the best we have had in recent years, said the club’s Head of Education & Welfare, Matthew Clarke.

Clarke continued,”In addition to the LFE education programme, Chris studies A Levels in Maths and Physics at a local high school sixth form and the club has received glowing appraisals from the Headteacher, who described him as an ‘exemplary student’.

“Chris is a ’model apprentice’ combining the education and performance demands of the apprenticeship extremely well achieving success in both areas.”

Midfielder Isaac had an excellent end to 2014/15. A regular in the Hatters reserve team and a standout in the under 18s, Isaac was the only Luton player not knowing if he was going to be kept on next season or not as the season reached the climax.

He was handed a series of starts in the second team and did enough to convince manager John Still to give him a pro contract. His hard work in training and games reflects what he did at Central Beds College where Isaac pushed himself in the closing weeks, working closely with tutor Nikki Baker, to raise his final Extended Diploma grade to DDD overall.

He applied to university and got offers from Bath, Derby, Birmingham and Bradford but has been able to put that on hold while preparing for a pre season training with the League Two outfit.

Originally released at the end of the season, defender George maintained a good attitude and starred in the Latics Youth Alliance Cup final demolition of MK Dons.

George even played in LFE’s first assessment trials in Bradford before Oldham reassessed his situation and offered him one-year professional contract to stay at Boundary Park.

“I’ve spoken to the relevant people and there are a lot of players who are highly thought of here and George was one of those.

“He knows the hard work starts now but he will be given every opportunity to progress at this club.”

Jack has done exceptionally well in all areas of his apprenticeship impressing LFE regional officer with his ‘work rate’ and ‘effort’.

“Jack’s had a great two years on the programme,” said Bartlett. “He’s worked tirelessly to earn a professional contract and has completed his academic work to a very good standard.”

Tony Daws added,”Jack’s another talented young player to come through the youth ranks and become a professional player at Scunthorpe. If he continues to apply himself he has a great chance of succeeding and making a name for himself in the first team.”

Kaiman banged in 25 goals last term to earn his first professional contract and even supported his less fortunate former team-mates at LFE’s assessment trials in May.

LFE regional officer Claire Wilberforce-Marsh, said, “Kaiman is a fantastic young man who showed that he has a really great character by coming along to support the Shrewsbury lads at the assessment trials earlier this year.

“He has passed his full framework to a good level while training with the first team on a regular basis and has demonstrated really good team work and commitment to continually improve both educationally and technically. He is always polite and willing to support his team both practically and emotionally.”

Goalkeeper Dan, signed a two-year professional contract with the Gulls last month just days after he was invited to train at Liverpool.

The young stopper was handed a first team debut in the 2-0 defeat at Aldershot on Easter Monday and then kept three clean sheets in his next three appearances.

LFE’s Roger Gibbins said,”Dan’s a great lad and deserves to be in The 11. He’s done well on the pitch and in the classroom and has a fantastic attitude.”