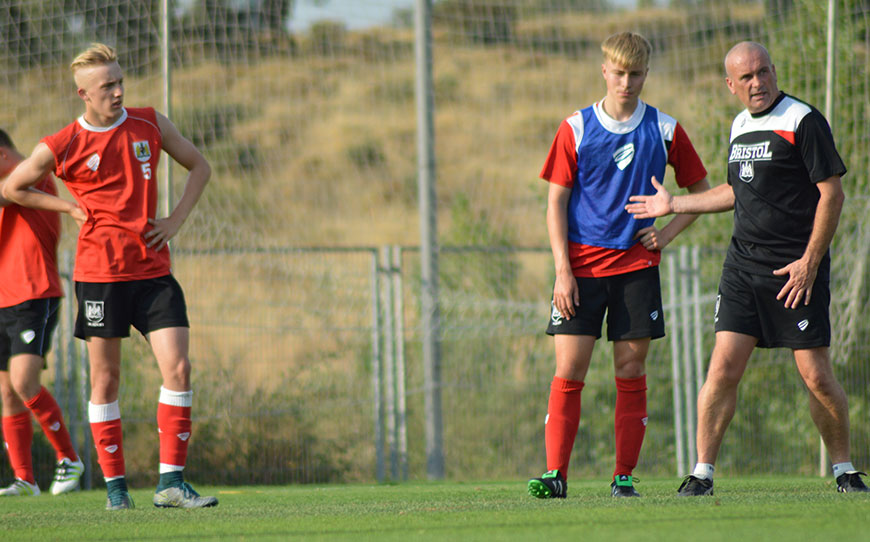 I continued my road to recovery with a gym session, while the rest of the boys went for their training session. I am trying to maintain my strength through this period of being injured, so I spent around 40 minutes in the gym before catching the end of the training session.

The heat has continued to be a massive factor in the level of performance from the boys and they’ve had to battle and adapt to the conditions, and although they are doing well to adjust it is still proving difficult to maintain stamina and put in maximum effort. We then had another Spanish lesson – we’re starting to pick up more and more. As we were going to a theme park the next day, we learned certain phrases and questions that we might need when we’re out and about, such as ‘Where are the toilets?’ and ‘Can I have a bottle of water, please?’

The following day, we had a training session in the morning before making our way to the theme park. I did my first leg session for a few weeks, so it was a hard and challenging morning for me, but it is definitely a step in the right direction towards getting back on the pitch, which is really encouraging. Having got that out of the way, the lads were excited about the day ahead and we watched some videos of the rides on the coach on the way there to get us in the mood. There was a range of rides, some more dangerous than others, and all were great fun. A few of the lads weren’t particularly keen on getting on some of the bigger rides, but we managed to get them all on, which was a good laugh to see them push themselves even when they were scared.

To be honest, I wasn’t keen on the look of some of them before we get there, but I enjoyed all the rides. Compared to some of the theme parks back home, I wouldn’t say it was matching them in quality but they’d still be up there in terms of variety and size. In addition, the day gave us the chance to use some of the Spanish that we have learned and practised since our arrival, with some having more success than others. Overall, all the lads enjoyed the day being in a different part of Madrid and it was a great bonding experience for the group, which I’m sure will help us for the season ahead.

Another morning training session followed, but the lads were more focused on the evening session later that day, as they were looking forward to working with the Getafe CF coaches at the club’s training ground. Like a lot of Spanish teams, the pitches were 3G/4G artificial pitches, which encourages possession football along the ground. This, of course, links to the style of the national team that seek to keep the ball at all costs. Watching from the sidelines, it looked like a tough session in the heat, being at a high tempo with fast-moving drills and then a match to finish. The lads appeared to be fairly tired after the week they’ve had so far, which is understandable considering the weather and intensity of the training sessions, but they kept going and put their all into it. Some of the boys had to be pulled out by the physio due to some little injuries, so that is something to be careful with as we progress through the rest of our time here.

It then came to game day, as we were finally able to put all our preparations into action against one of the best academies in Spain – Atlético Madrid – at their training ground. Before our game, we watched the Under-21s. The 4G surface looked perfect to play on and we were surprised to see Koke, Juanfran and Yannick Carrasco come onto the pitch, as they had been given a longer break from the first-team squad having played in the European Championships. It was a real treat to watch them in the flesh and they were a class apart from the rest.

Unfortunately, we weren’t able to play Atlético for a full match, so we played a triangle tournament along with Oxford to make up 90 minutes. We held our own against Madrid and really impressed ourselves with how well we matched them. On another day if, if we had’ve converted some of our chances, the result could have gone in our favour, but we fell just short, losing 1-0. Following our efforts against them, we seemed to switch off our focus for the second half against Oxford and we were punished with a disappointing 2-0 defeat. However, we will learn from the experience and will try our best as a team to correct our errors and take heart from the way we competed against a top team like Atlético.