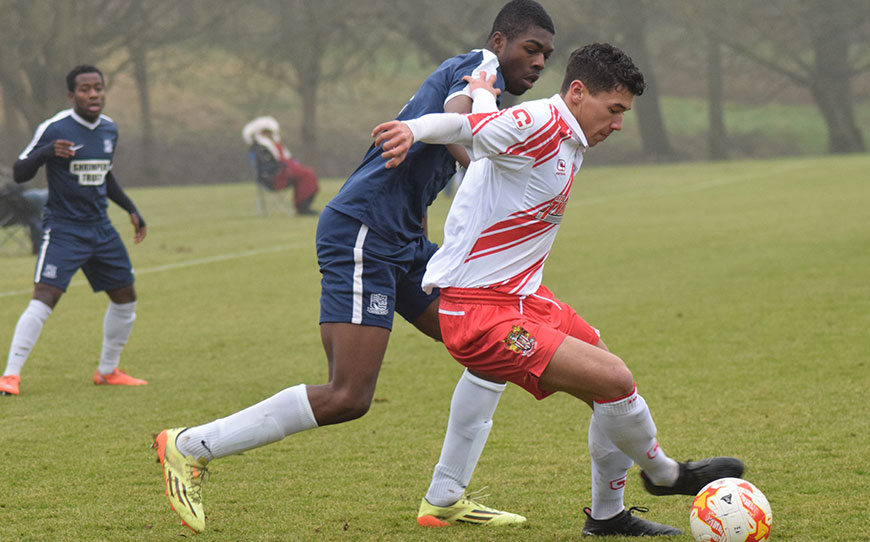 There were times during the second half when Stevenage must have been cursing Southend goalkeeper Nathan Bishop.

The first year apprentice, signed from Watford last summer, saved the Blues time and time again as Boro’s exciting attacking unit kept getting behind an inexperienced Southend defence only to be thwarted.

But with only five minutes left, Bishop was beaten by a stunning shot by substitute David Etheridge to secure the points for the home side at Bragbury End.

The win sees Stevenage leapfrog Southend into second place in the Alliance South-East Division but, having finished their fixtures, they must now wait for the outcome of Southend’s final game with Gillingham later this week to see if they hold on to runners-up to leaders Orient or slip down to third.

Southend were the livelier of the teams in the opening period, striker Sewa Marah showing speed and athleticism to stretch the Stevenage defence, but he was unable to convert their best opening on 12 minutes, slicing well wide.

Boro were starting to get Andronicos Georgiou into the game, the first year forward finding pockets of space on Southend’s left, and it was no surprise when he opened the scoring on 24 minutes.

Centre-back Ben Wilmot broke up a Southend attack, fed right-back Theo Mensah, on trial having been released by Norwich City, and he set Georgiou free. The winger from Cheshunt played a one two with Under-16 Sam Willis which sliced through the Blues’ defence and he slipped the ball past Bishop.

The lead lasted just a minute. Southend forced a corner on the right, whipped in by Imani Matthews, and Marah leapt high at the far post to chest the ball in: a bizarre finish albeit due to a fine piece of athleticism.

As half-time approach, Stevenage turned the screw and Bishop began a string of fine saves. He parried a Mark McKee cross-shot into the path of Zak Guerfi only for centre-back Zak Pianim to block the goalbound shot, then beat away a fierce drive by Georgiou.

Stevenage had by far the better of the second half’s chances, while Southend competed well and made for an even contest. When Bishop parried centre forward Claudio Ofusu’s cross-shot, Liam Brady could only slide the rebound onto the post, and then Bishop showed strong wrists to keep out a stinging shot from Georgiou.

Bishop was finally beaten again on 65 minutes in strange fashion. A long clearance by the Stevenage goalkeeper looked innocuous enough only for Mensah to steal the ball of centre-back Harry Cuthbert. His first effort was saved by Bishop but he was able to roll in the rebound to give Stevenage the lead again.

That only lasted seven minutes as Southend midfielder Ben Musselwhite conjured something wonderful out of nothing. Advancing into the left side of the box, he transferred the ball to his right foot and curled a fabulous shot into the far top corner for an exquisite equaliser.

Southend looked like grabbing a point but left frigid Bragbury End with nothing for their efforts when Stevenage striker Etheridge, who had only been on the pitch little over ten minutes, controlled a driven ball under his feet and adjusted quickly to curl a fantastic shot past Bishop for the winner.