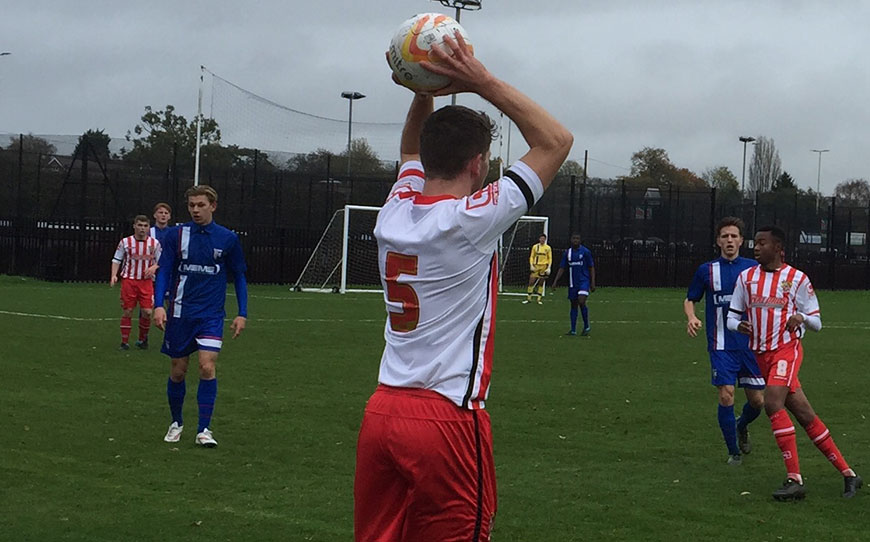 By Gavin Willacy at Shephalbury :

A magnificent free-kick by Gillingham forward Bradley Stevenson decided a tight game in north Hertfordshire in which both sides could have won or lost.

A minute after half-time, first year apprentice Stevenson took a free-kick on the right-hand side, about 25 yards from goal. Assuming the Stevenage keeper – on loan from Reading as both of their apprentice keepers are injured – would expect a far post delivery, he bent the shot into the near post stanchion.

That put the Gills 2-1 up, a lead they held on to. Yet two minutes of play earlier they had trailed.

As half-time approached, Stevenage led 1-0 as Gillingham were awarded a free-kick just outside the box. A clever move saw Aaron Simpson slide the ball wide to the right of the defensive wall where Harry Stannard was waiting.

Stannard thrashed a shot across goal and into the far side of the net from an acute angle to equalise.

Boro will have felt rather aggrieved, having had the better of an entertaining first half.

After eight minutes, Gills keeper Will Sykes and his defence all hesitated, enabling a Stevenage header to hit the bar only to be rescued by the assistant referee’s offside flag.

Cregan nearly doubled his and Boro’s tally on 28 minutes when he controlled a right-wing cross, turned sharply and shot only inches wide of the post. Stevenson then drove a long-range effort narrowly wide in a rare Gills attempt on goal.

And on 32 minutes, Stevenage’s Northern Irish centre-back Matt Smyth stepped in to intercept a pass to Mbo to start another Boro attack, a one-touch flowing team move ending with Cregan curling a shot just wide.

Then came the two Gills’ goals a minute either side of the half-time break which turned the game on its head.

Stevenage earned a series of corners after going behind but failed to replicate their coherent attacking play of the first period.

With five apprentices out injured and another two unavailable for selection, Boro academy manager Robbie O’Keefe fielded his son Charlie at left-back, another Under-16 on the left side of attack and a non-contracted player in central midfield, all of whom showed promise.

They even ended the game with 10 men. Louis-Michel Yamfam was taken off with an ankle injury ten minutes from time and Boro had used both of their two fit substitutes, neither of them scholars.

Stevenage now move on to an FA Youth Cup clash up the A10 at Cambridge United on Wednesday night, while Mark Patterson’s Gillingham are back on track after their FA Youth Cup humbling at home to local non-league neighbours Ebbsfleet in the previous round.