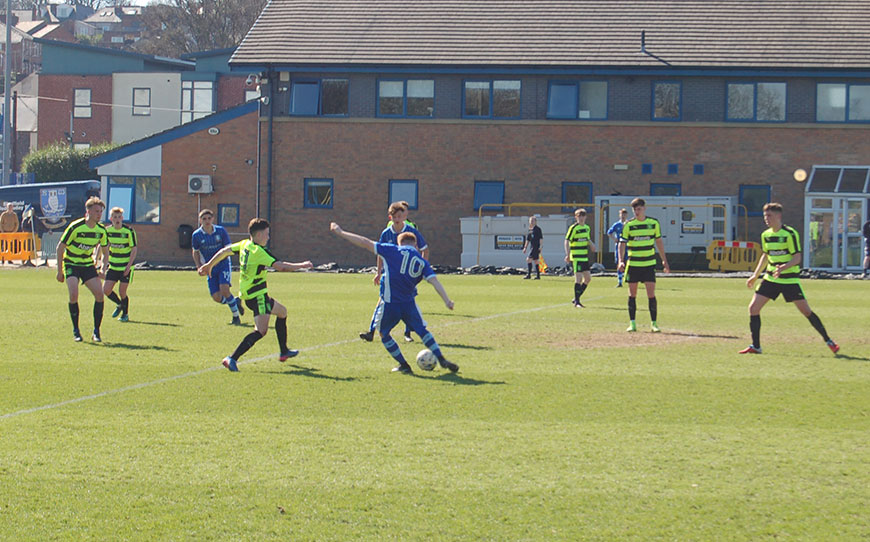 A lively start saw the visitors looking threatening, and Denilson Carvalho squandered a golden early chance for the Terriers when, after rounding Wednesday stopper Arijus Brazinskas, he saw his shot blocked on the line.

However, the match was turned on its head with barely 20 minutes on the clock. Jordan Lonchar latched onto a long ball and tempted Town goalkeeper Owen Brooke into a poorly-timed challenge inside the box, which resulted in a red card and penalty.

Alex Hunt stepped up confidently and sent substitute Sam Kelly the wrong way, and he was soon retrieving the ball from his goal again when Liam Williams rose to send a towering header high into the net.

Leigh Bromby’s side refused to give in, however, and they clawed their way back into the contest minutes before half-time when striker George Danaher’s low shot crept into the bottom corner from the edge of the area.

Despite their bravery, any faint hopes of a second-half Huddersfield fightback were extinguished as Wednesday pressed home their numerical advantage. Only Ben Hornsby will know whether he attempted a cross or a shot, but saw the ball sneak in at the near post regardless to restore the Owls’ two-goal lead. Another excellent header from Williams was followed shortly by Lonchar’s close-range finish at the far post to give the score-line a more emphatic feel.

Town managed to pull a goal back with ten minutes left on the clock when Carvalho’s teasing cross was handled and Cedwyn Scott coolly dispatched the resultant spot kick. However, Wednesday immediately grabbed another goal when substitute Layton Swaine pounced after Kelly had made a good initial save.

Despite the heavy defeat, Bromby refused to be too critical of his players and instead praised the fighting spirit shown by his players.

“It was interesting for me to see the character of the players. I think we had the better of the play – they scored from set pieces and lobbing balls into the box,” said the former Wednesday defender.

Of the red card shown to Brooke, Bromby added: “It killed the game. Under the new rules I think it was harsh.”

His opposite number, Ben Wilkinson, concurred. “Under the latest rules it was definitely a penalty but maybe not a red card.

“I was pleased with how we held on to the lead. Conceding the goal just before half-time could have made it a little bit nervy but we stayed focused and managed to see the game out.”