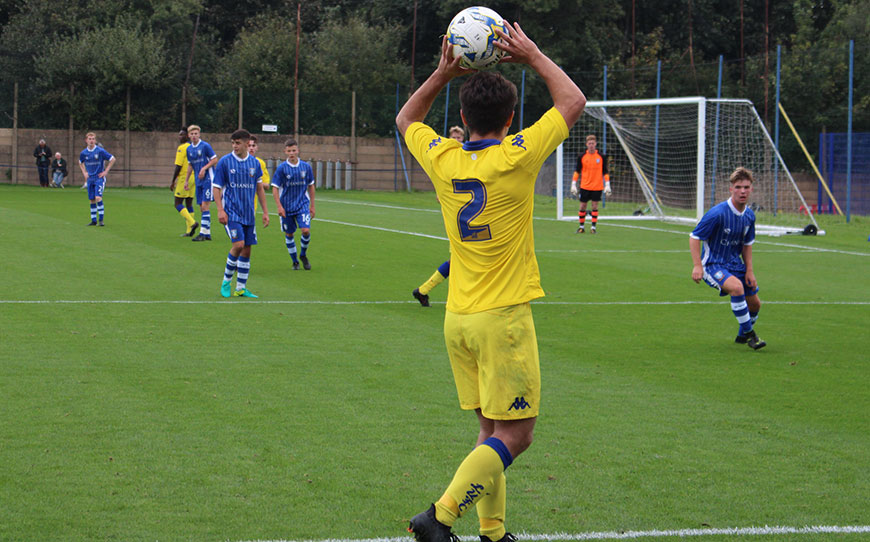 By Seb Gigner: George Hirst helped himself to a hat-trick as Sheffield Wednesday secured a comfortable 3-0 victory over Yorkshire rivals Leeds United at Middlewood Road on Saturday.

Hirst opened up with a brace inside the opening 25 minutes and grabbed his third goal in the 90th minute as the Owls’ recorded their fourth successive victory in the Professional Development League.

This Yorkshire affair burst into life in the 9th minute, when a delightful cross-field ball from Wednesday’s Connor Kirby was collected by Fraser Preston on the left flank. The attacker drove purposefully towards the by-line before floating a cross towards the far post to Jordan Lonchar, whose initial effort was stabbed home by Hirst.

Wednesday doubled their lead when Liam Waldock raced onto a loose ball and was able to touch the ball on to Hirst who did the rest with a thunderous strike from the edge of the box which left the Leeds goalkeeper, Will Huffer, with no chance.

As Wednesday pressed for a third goal before the interval Ben Hughes and Hirst saw efforts flash wide of the mark and Joe Cook’s looping header bounced off the top of the Leeds crossbar and away to safety.

Leeds improved after the interval. Alex Wollerton almost halved the arrears in the 46th minute but his powerful shot was blocked by Jack Lee. Wednesday keeper Dan Wallis then denied Leeds substitute Maxwell Hill he had made firm contact to Henry Rollinson’s corner.

Having survived an early second-half Leeds offensive, Wednesday pushed forward. Hirst was denied by a magnificent fingertip save from Huffer after the striker burst through the Leeds back-line.

As the match reached its final moments, the hosts rounded off the scoring. Hughes charged down the right-wing, evading several defensive challenges and his cross was thumped home emphatically by Hirst.

Owls boss Paul Murray was pleased by his team’s efforts and in particular their first half showing, which had laid the foundations for victory:

“The only criticism is we should have gone in after the first half three or four nil up.”

“Second half was a bit bitty for me, we kept a clean sheet, but if we’re playing against better opposition we’ll get cut open, Leeds were very young.”

Hat-trick hero George Hirst drew further plaudits from Murray, however still needs work on certain facets of his game to improve even further according to the Wednesday boss:

“George got three, but it could’ve been five or six. He’s got some great attributes, but he needs to tidy up his finishing and his holdup play, he knows that, he’s very honest with himself. He’s a great spear at the head of our attack.”