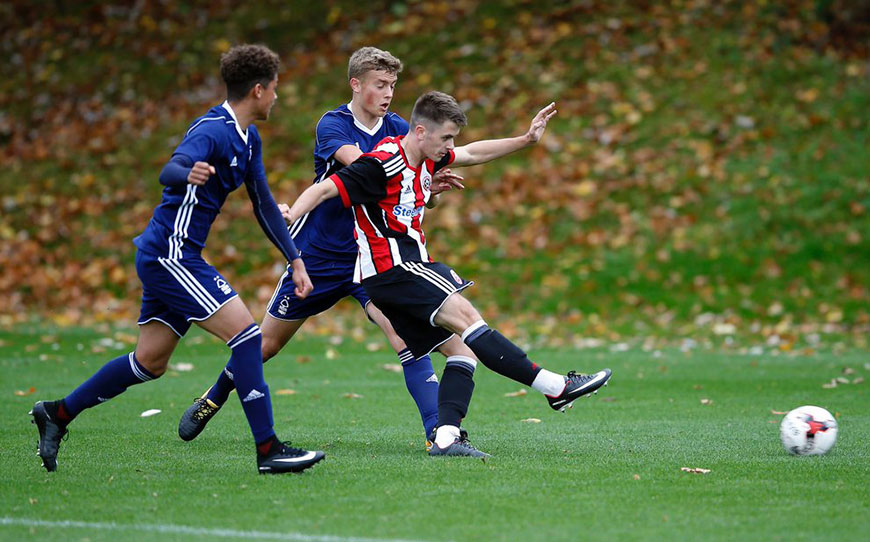 By Joe Harris: Sheffield United Under-18s triumphed over second-placed Nottingham Forest despite being reduced to 10 men when defender Will Portman was dismissed for a second bookable offence following a collision with his own team-mate.

Oliver Greaves opened the scoring after half an hour, while Max Ram’s own goal doubled the margin as the Blades extended their unbeaten run to five games in the Professional Development League North.

Despite their recent upturn in form, United had yet to keep a clean sheet in their previous six matches to start the 2017-18 season and were under the cosh early on as Arvin Appiah fired a left-footed effort just wide of the post, while Blades keeper Hugo Warhurst was fortunate to escape punishment when he appeared to handle the ball outside the area.

However, the hosts forced their way in front after a cagey first 30 minutes when Forest failed to clear a cross from deep on the left flank, with the ball falling to striker Greaves to smash home from close range.

Forest responded with a late onslaught to end the half as Alex Mighten whipped in a dangerous free-kick that was superbly gathered by Warhurst and the visitors continued to press for an equaliser after the break.

Wingers Appiah and Mighten looked particularly menacing on either flank, but were unable to carve open the United defence. And against the run of play, the Blades added a second through an own goal when substitute keeper Nykah Liburd misjudged a routine back pass from Ram and allowed the ball to dribble underneath him into the net.

But the main talking point was still to come as Portman received his marching orders midway through the second half after a freak incident involving team-mate Cliff Mason, who was only introduced as a half-time substitute.

The second-year apprentice performed a high challenge with the intention of halting Mighten’s progress, but instead collided with Mason, who was withdrawn after a lengthy stoppage for treatment and resulted in Portman’s dismissal.

Forest piled on the pressure in the latter stages in a bid to make the most of their numerical advantage, but Brennan Johnson failed to hit the target with a free-kick before being denied by a magnificent double save from Warhurst from point blank range as the home side held firm to the final whistle.

Blades boss Derek Geary told LFE: “We’ve got a much younger team this year so we are much less physical, but in terms of organisation today we were superb, everyone knew their roles.

“We know it wasn’t the greatest of games and conditions were tough, but I think we were comfortable in the end.

“I think we could have been better on the ball, but we kept our shape well and didn’t panic, even when we did go down to 10 men. I’m not sure what the red card was for, I’ve spoken to the referee but I’ve never seen anything like that.”

The result sees Forest slump to their third consecutive defeat, while United are edging closer to the sharp end with just four points separating themselves and top of the table Burnley having played a game less.