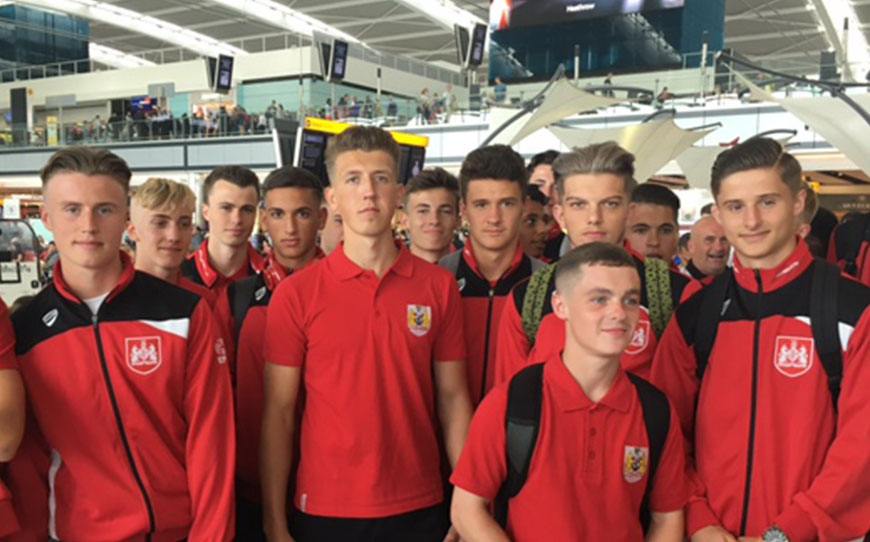 Hello, my name is James – I am a second year scholar for Bristol City and have been at the academy since I was 14. I am a central midfielder and would liken myself to a player like Michael Carrick, although I am left-footed. I would like to think of myself as a humble, hardworking and positive person, which my parents have brought me up to be alongside my faith, Christianity.

About two months ago when the trip was first mentioned to us, the whole squad were immediately excited and we have all looked forward to this trip ever since, regularly discussing who we are playing or what the hot weather is going to be like or even what hotel we will be staying in. I was expecting a hard challenge with adapting to a completely different culture to what we are accustomed but it will be interesting to see the Spanish way of life.

Unfortunately, I was injured about four months ago. I broke my foot in training the day before the last game of the season and as a result, I am not able to participate in any training sessions, which is frustrating. But I am able to work hard in the gym and do lots of swimming for my fitness, so I’m not completely redundant. Obviously, I’m gutted to be injured on this amazing opportunity to be playing football in one of the best footballing nations in the world, training with foreign coaches and playing against some great Spanish teams, but I am trying to remain as positive as I can be and do everything I can to keep progressing with my injury, even in times when I feel down about being sidelined.

Since we arrived we have had two Spanish lessons, which both lasted about an hour and a half. It has been very interesting to learn how the language is spoken having studied German at secondary school and there is a big difference with the two in terms of methods of pronunciation. In the first lesson, we were taught basic phrases such as “hello” and “how are you?” We were then put into pairs and we had to speak simple conversation in Spanish, which was a good laugh, as well as a good learning experience. The second lesson was in the same format but just extending our vocabulary. I think the teacher we have is very good at keeping us entertained during the sessions so that we’re not overwhelmed with learning the language, despite the sessions being quite long.

Another thing that has been good is the weather, as it has consistently been around 35 degrees each day. The lads and I have been loving it as we are not used to this much sun/heat every day in Bristol! From watching and hearing what the lads have been saying about training in these conditions, they said it is hard work as they are not used to it but they are finding it easier each day as they are adapting to the climate well. The coaches have to their credit balanced the workload well, making sure there’s not been too much overload of training at high intensity (with also a lot of water breaks to hydrate).

The food here is delicious. Every meal – breakfast, lunch or tea – is always healthy and filling for us all. I have particularly enjoyed all the meat that we have had, which has varied from turkey to chicken to bacon to BBQ ribs. Everyone has been saying the same things – it’s great! The facilities here are fantastic and the pitches are particularly impressive. They are flat, cut perfectly and feel nice and spongy, which is much easier on the legs and more comfortable to play on. Compared to our facilities, they are much better than what we have at Bristol, so all the lads and I are enjoying and making the most of this experience to use these facilities well and correctly.

On Tuesday morning, the boys had a training session led by a Spanish coach from the Spanish FA. He demanded a high tempo and coached some new drills from what we have previously done at home, so that will be beneficial to the lads that participated. Another difference to what we are used to in England was more possession-based drills, alongside quick attacking with a finish at the end of it. Back at home, it is more of a transition style of play, instead of a more controlled way of football. As a result, the lads have been exposed to a new method of playing the game that we could hopefully use to our advantage in the future.

Aside from the playing aspect, I am looking forward to the theme park on Thursday, which sounds and looks really good fun. Also, we will be having a tour around Real Madrid’s stadium, the Bernabeu, which is one of the best stadiums in the world and hosts the best football team in Europe (as Champions League winners), so that will be another great experience. And of course, I will be looking forward to enjoying some more sun!

All the boys on this trip so far have settled in nicely and are finding it mostly all well and good. Everyone likes their rooms that they are staying in as it has everything you need, as well as a very comfy bed. Also, the boys are really enjoying playing at a facility that the Spanish first-team have trained and used and we are all feeling positive that this trip will improve us as players. The only issue really is that we are not used to the long days as in Spain they wake up early and go to bed later, which is much harder and different to what we are used to, but we are slowly adapting to this and will be up to speed sooner rather than later.