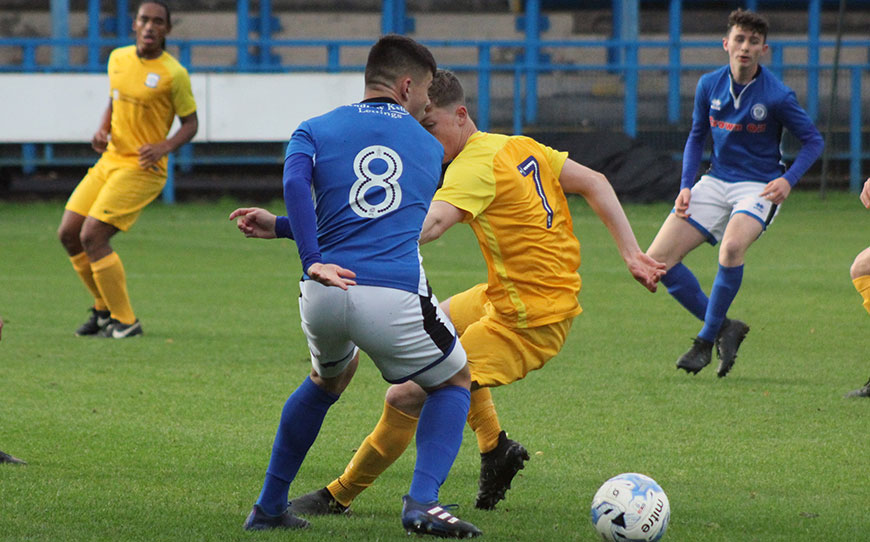 By Kane Brooker: A late strike from Lewis Bradley completed a sensational second-half comeback for Rochdale Under-18s in their 3-2 win over Preston North End.

It looked to be a frustrating morning for the Dale as they went into the break two goals down courtesy of Darren Brannigan and Lewis Fensome.

However, parity was restored when goals in quick succession from Neil Kuemo and Fabio Tavares turned the game around, setting up the late drama with Bradley’s winner.

Preston looked the more dominant side throughout the first half and repeatedly tested goalkeeper Brad Wade. Tyrhys Dolan came close after breaking on a counter attack and Brannigan almost headed home an inviting delivery from Mike Howard.

Rochdale struggled to find their feet, with Dolan’s pace and trickery proving a real threat and were finally punished after 32 minutes when Howard claimed his fifth assist of the season, crossing into Brannigan to tap home from close range.

A long-distance effort from Dolan almost caught Wade off his line immediately after, but he could only connect with the crossbar from 25 yards. Meanwhile, Brannigan saw several chances creep wide and could have had a hat-trick before the break.

North End ensured their lead was doubled in the closing stages of the first half though as defender Fensome climbed highest in the area and beat the goalkeeper with a towering header two minutes before the break.

“The two goals were extremely well worked,” Preston Academy manager Nick Harrison told LFE. “We carved them open with pace and good passing and were really direct in our positive attacking play.”

Rochdale emerged with a different style of play for the second half and reaped the benefits. Visiting keeper Callum Roberts was regularly tested in the first few minutes, with Florent Hoti’s effort coming closest.

A decisive moment saw Captain Joe Renner time a challenge impeccably to prevent Howard adding a third for the visitors and the deficit was halved soon after, courtesy of Kuemo. The 17-year-old produced an explosive run to beat three defenders, before composing himself to find the bottom corner.

Rochdale then capitalised on a lapse of concentration with a second goal just a minute later. A lofted pass allowed Tavares to beat the Preston defence and coolly finish past the hapless Roberts to set up an exciting last half an hour.

The term ‘game of two halves’ seemed particularly appropriate as the Lilywhites looked a shadow of their first-half selves, while Dale continued to up the ante.

Tavares came close to putting his side in front when forcing a fine save from Roberts in a one-on-one situation and then substitute James Neild was halted only by a strong punch.

Midfielder Bradley said: “That’s the most a goal has ever meant to me. We weren’t great in the first half and didn’t press enough, but we came out positive and tried different things.”