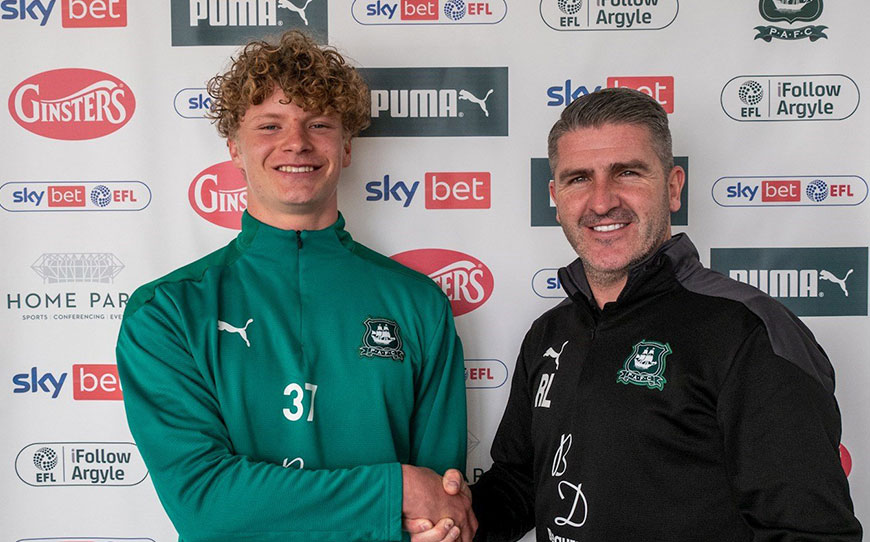 The left-sided defender joined the Pilgrims’ academy at Under-9 level, and was invited to an England Under-15 England camp back in August 2018.

Having been a regular for Argyle’s youth team last season, Pursall stepped up to first-team action in September 2020, when he made his senior debut as a 76th-minute substitute in the Papa John’s Trophy against Norwich City, becoming the club’s third youngest player in a competitive game at the age of 16 years and 176 days.

In the same competition, the talented teenager was handed a first start a month later against Cheltenham Town and then added to his tally for a 3-1 victory over Newport County.

Plymouth Manager Ryan Lowe told the club website: “I’m extremely pleased for Brandon. From the day I met him, it’s been clear that he has a great attitude and desire to do well, and he has shown that right the way through the ages in the academy.

“I’m pleased for him and his family. He’s earned this contract as he’s a fantastic talent – to have already made his debut at 16 speaks volumes. He regularly trains with the first team and holds his own. He’s another excellent addition and another academy product who will go on and represent Argyle.”

Neil Dewsnip, Director of Football at Home Park, said: “I’m delighted for Brandon and his family. It is a really important milestone in his young player development pathway. It’s also really important to the club. It’s a great sign that our academy is working. It is producing players that Ryan and I believe are of the standard appropriate for Plymouth Argyle.

“I know he’s already played in the first team, but the expectations will now change, and the challenge for Brandon will be to reach those levels on a regular basis.”