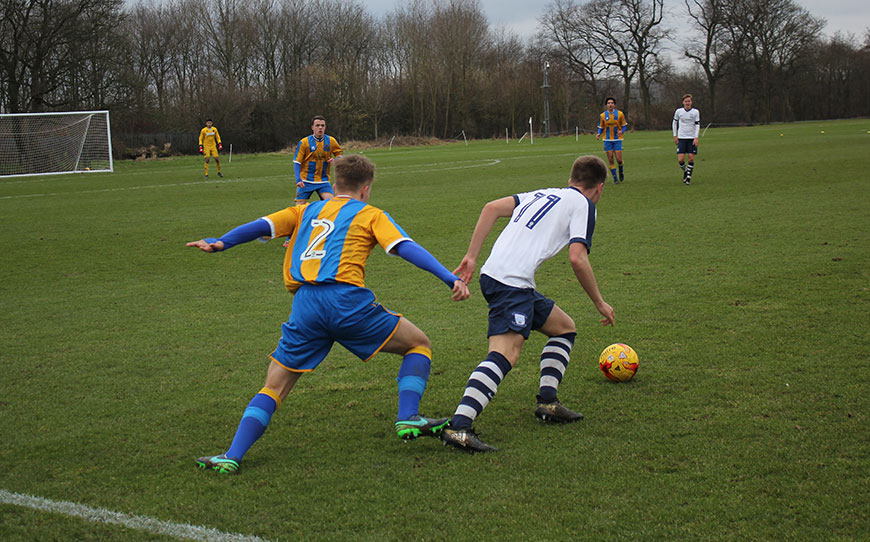 By Matthew Brown: Shrewsbury Town came back from two goals down to draw 2-2 away at Preston North End on Saturday.

Tom Stead’s header and Melle Meulensteen’s penalty put Preston comfortably ahead inside 20 minutes, but the visitors responded with John McAtee’s 28th minute header before Tyrone Ofori equalised with a confident finish early in the second half.

Preston had plenty of the ball early on, but Shrewsbury should have taken the lead after eight minutes when Aaron Gilpin hit a first-time effort wide of the post.

The home side took advantage, with Stead heading into the top right corner from Meulensteen’s corner after 11 minutes.

Shrewsbury had an effort cleared off the line before Preston extended their advantage, as Meulensteen placed a penalty straight down the middle in the 17th minute after Tom Barry had been brought down in the box.

The visitors looked threatening in attack, though, and pulled one back through McAtee just before the half hour mark as the attacker glanced a header into the bottom left corner.

Shrewsbury tested Preston goalkeeper Callum Roberts with a number of shots from distance and Dylan Davidson failed to convert one-on-one at the other end, but the hosts held onto their lead at half-time.

That quickly changed after the restart, with Town equalising from a deep right wing cross in the 49th minute as Ofori squeezed a finish inside the near post.

A number of substitutes from both dugouts saw the encounter stall for a while but an entertaining finish followed, as the hosts’ pressing nearly brought a scoring chance while Ofori was denied at the other end.

The game ended at 2-2 and Shrewsbury coach Ben King was pleased with his side’s performance. He said: “The players have put in a really strong performance there. They’ve pulled themselves together and got back into the game extremely well.

“We could have scored a couple of more goals if we’d taken those chances, but the same goes for them. We made a couple of mistakes and that’s what cost us for the other two goals.

“We moved the ball around at the back really well, and then tried to play through the thirds. We worked it all the way through into the penalty area a number of times, it’s just that end product that we lacked today.

Preston boss Nick Harrison, said: “I felt we finished the game really strongly and I thought for the last 20-25 minutes we put them under real pressure.

“I’m pleased with the way that we finished the game, because I felt that we had a number of chances to go and actually win it, which we probably would have done on another day.

“We always work on certain things, but you can never recreate it for real. Scoring from set-pieces is all about the ball into the box and the movement of the players wanting to attack the ball, and I felt Tom Stead did that really well for his goal.”