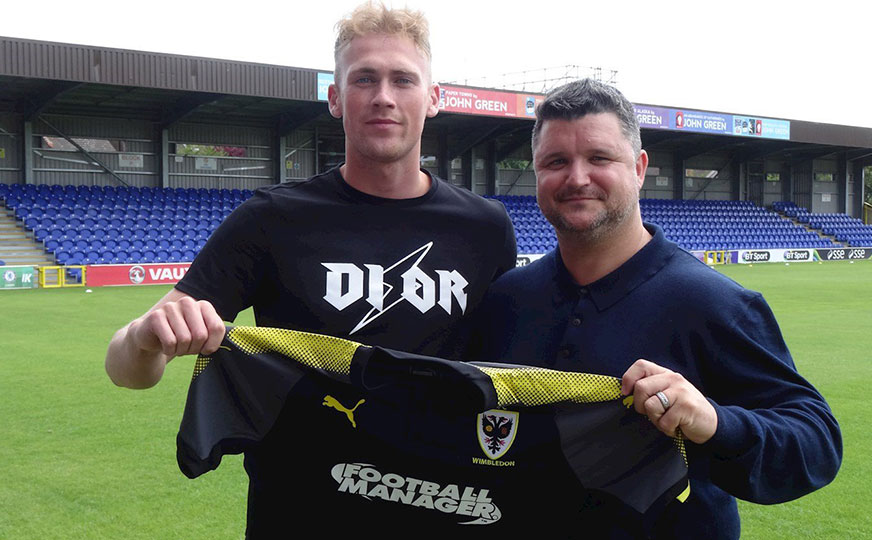 By Kelly Butterworth: Former Southend United apprentice Mitch Pinnock has jumped back into the English Football League, becoming the first signing of the summer for Sky Bet League One outfit AFC Wimbledon, with the fee to be resolved by a tribunal.

The 23-year-old appeared twice for the Shrimpers at the end of the 2012-13 campaign, but did not receive a professional contract after completing his apprenticeship and spent two seasons playing for various non-league clubs, including Bromley, Concord Rangers, Tonbridge Angels and Maidstone United, before settling in the National League with Dover Athletic.

Pinnock established himself as a regular in the first-team, netting eight goals in 42 appearances to help the side to eighth place in the table, missing out on a play-off spot on goal difference.

First-team coach Simon Bassey told the club website: “It had been ongoing for a while and another League One club were interested in him, but he showed a real desire to join Wimbledon and we’re really pleased to get the deal done.

“He’s a good athlete, tall, he can cover the ground, get around the pitch and he’s versatile. He can play in numerous positions off the right and off the left.”

Pinnock added: “There were a few other clubs interested, but I felt AFC Wimbledon was the right club for me. They’ve taken players from non-league before and given them chances, I felt it would be good for me to come here and it’s a club going in the right direction.

“I’d say the strong point of my game is putting crosses into the box. I’m confident in my own ability, but Joe Pigott showed when he made the step up from Maidstone that it can be done. There are a lot of players out there that don’t get the chance so I’m really looking forward to the challenge.

“I can’t wait to get started, it’s been a couple of weeks sorting everything out, but I can’t wait to get out there and start playing some football. The club has come such a long way in a short space of time and I just want to be a part of it.”