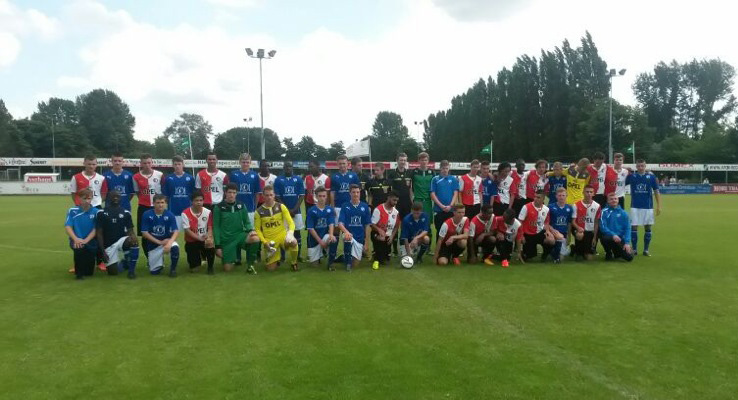 Saturday was our match day against Feyenoord. In the morning we finished packing our cases to take with us on the coach as we were moving hotel straight after the game where we will finish our tour.

We knew the game was going to be hard as we were playing against a top division Dutch side and our preparations for it were good, but unfortunately we didn’t play as well as we wanted to and ended up losing 4-1 again. One thing that is very obvious about the two teams we have played so far is that both sides play very similar styles of play. They both liked to pass the ball about and wait till an opening came up to break forward.

After the game we went straight to the new hotel and we were all very impressed with how good it is. In the evening we had a light training session on the new pitch where we were going to train for our second week. The training session consist of light technical work and a bit of finishing at the end.

We planned to head to Zwolle and watch them play a first team match against Feyenoord on Sunday so we had a training session in the morning which was very similar to the other training sessions we have had.

When we arrived at the game in Zwolle, it was very noticeable that there is a massive difference between English Premier League grounds and Dutch top division grounds. We had now seen two top division Dutch sides’ grounds – NEC Nijmegen and Zwolle FC and they have not at all been up to standards with English grounds. Zwolle holds about 12,000 where as Chesterfield in the bottom league of English professional football holds 10,000.

It was a great experience to see how the Dutch sides play however the game was a lot poorer than what we expected. Their fans are quite different to English fans and the Dutch are allowed to smoke inside the ground which we thought was weird.

Today I had a different day from the rest of the lads because I got injured the day before in training which is very disappointing. I had a swimming session in the morning and a gym session in the afternoon, but the other lads had two football sessions today. In between the two sessions we all had a great time playing water polo to have a bit of fun.

The hotel which we are staying in at the minute is very good and we all are impressed with the facilities and food. Now the lads are looking forward to another Dutch game tomorrow and we travel to Vitesse.

Hopefully we are all focused on tomorrow’s game and come away with a victory.