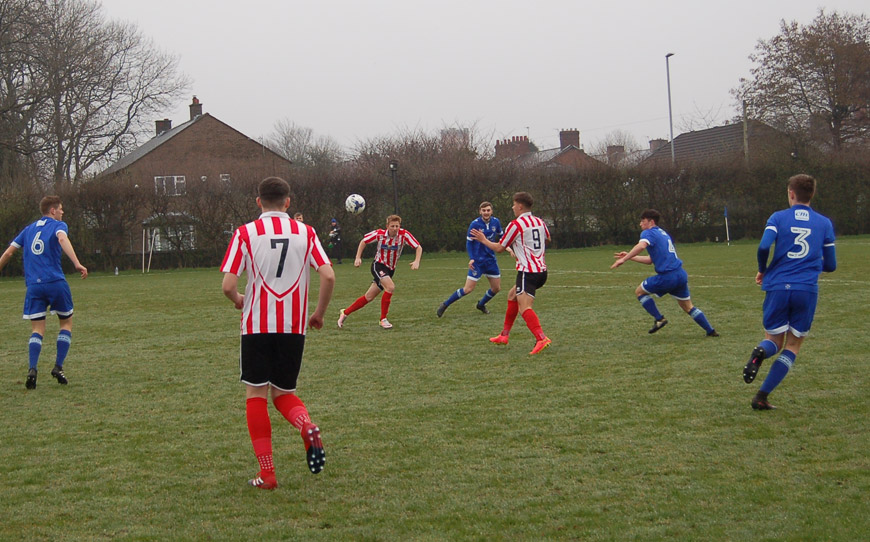 By Seb Gigner: Two late first-half goals secured an unlikely 2-1 victory for Lincoln City in a top versus bottom clash with Oldham Athletic at Chapel Road on Friday in the Youth Alliance North East.

Oldham asserted their dominance early on, with Brad Kay’s speculative drive from range clipping the outside of the right post to signal the Latics’ attacking intent.

Moments later, a lofted clearance from inside the Oldham half by Tom Hamer was caught by the wind, bouncing over the off-guard Regan Start before rebounding off the underside of the bar to spare the Lincoln keeper’s blushes.

After controlling the opening exchanges, Oldham found a deserved lead in the 11th minute through Mason Fawns, whose thunderous strike from the edge of the area rocketed into the bottom right corner to open the scoring.

Despite Oldham dominating the first-half proceedings – hitting the woodwork for a third time through Rory Middleton – Lincoln grabbed an equaliser in the unlikeliest of fashions.

A tame back-pass towards Latics keeper Boyling bobbled on the muddy surface and the keeper erroneously sliced his attempted clearance into his own net.

Seconds later, a clearly stunned Oldham were punished further when McMenemy was fouled in the Latics penalty. the striker got to his feet to thump the spot-kick home.

Tenacious late defending from Lincoln saw them hold on to secure a priceless victory, shattering Oldham’s impressive unbeaten streak at the top of the division.

“It was a great team performance, we dug in against a very good Oldham side,” said delighted Lincoln City coach Dean West.

“We showed a great work ethic and we played as well as we could on a tricky surface. When we came under pressure in the second half, we didn’t just kick the ball out of play, we tried to play balls into the strikers.

“We can definitely lift ourselves off the bottom, we’ve come away to Oldham and showcased what we’re capable of as a group.”

West’s opposite number Tony Philliskirk was unhappy with his team’s profligacy in front of goal and paid tribute to Lincoln for their hard working performance.

“We started the game brightly and found ourselves ahead. We hit the bar and the post and had two or three great chances, but you can’t legislate for individual mistakes,” Philliskirk said.

“After the first goal, we gave a needless penalty away and we’ve been punished for those mistakes. Congratulations to Lincoln, they’ve come and on the balance of play shown a lot of resilience and probably deserved to win the game.

“Hopefully it’s a one off, we’ve had an unbelievable run, but on the day we just weren’t good enough.”