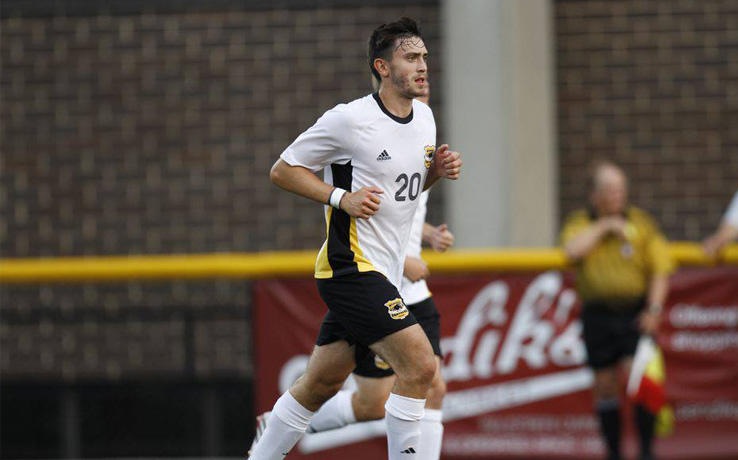 I know that an American soccer playing adventure is the talk of many YTS changing rooms. When scrubbing the boots of the professional players you envy and aspire to be, it can become disheartening so life across the pond playing football at a university with thousands of sun-kissed students sounds more than appealing. I had those conversations. Sadly though, I think for many people it doesn’t feel like a plausible option. It is. I’m doing it. You can too.

Every Englishman on a scholarship over here says the same thing: “I didn’t know what to expect when I came out here.”

Through this blog my aim is to provide that information where I can and dispel myths or preconceived ideas that people may have about what it’s really like. If you’re a current apprentice player this blog might help you make the same sort of life changing decision that I made a couple of years back.

American college soccer (I know it’s football back home) is a superb opportunity for those coming out of an apprenticeship at a professional football club. Most universities are set-up to match and in a lot of cases better the environment you’ve been used to. Facilities and travel arrangements mimic top flight clubs and with thousands of passionate fans at each game, the chance of a free education through a university scholarship and the chance of being drafted into the MLS it can be a great option.

A little over two years ago, my dreams of spending a career kicking footballs around English league grounds were dealt a serious blow in the manager’s office at Spotland.

I wasn’t given the professional contract that I craved and I’ll be the first to admit that it did knock the wind out of my sails. However after a hurried application process, numerous transatlantic phone calls and a crazy week with fellow youth-team rejects partying on a Greek island, I was ready to start a new chapter in my life.

Now, after a three month summer split between playing in the National Premier Soccer League, travelling in California and at home with family in England, I am back in Milwaukee for pre-season. This Midwestern American city is where I live for most of the year, studying at the University of Wisconsin-Milwaukee and captaining their soccer team. I love it.

To get here I took advice from LFE staff and then took a leap into the unknown. I signed up for their end of season Assessment Trials and ticked a box saying I’d be interested in earning a scholarship to an American university. I spoke to numerous head coaches and just over a month later I was at Manchester airport saying my goodbyes to loved ones and excitedly setting off on my travels.

The first thing that I noticed as my plane neared touchdown was baseball fields. Namely, how many of them there were. On the ascent at Manchester I’d had a birds eye-view of Greater Manchester and could make out the markings of football pitches every few hundred yards but on arrival in America there were none. Instead I saw diamond after diamond – the shape of the fields on which Americans play one of their three main national sports (The others being American Football and Basketball). This was alien to me and immediately set me thinking. What have I got myself in for? Will the differences be too great for me to settle? Was I too far from my family? Can Americans even play football as I know it? Will these cowboys like me?

Entering my third-year any doubts I had about my decision to cross the Atlantic have well and truly disappeared. I am just as close with my family, the standard of football is high here and Americans absolutely love English people.

Currently, my new season has just got underway. We started with a victory in our derby game against the city’s other big university in front of 3,500 fans. The game was held under floodlights on our home pitch – a FIFA 2 star astro-turf pitch that meets World Cup and Champions League standard and is positioned bang in the centre of the university campus. The facilities are fantastic, we train every day and players get looked after with food, clothing and boots.

Classes are starting again too. Schoolwork does require considerable effort and time but earning a degree is very achievable and help is at hand for any students having difficulty. I will graduate with high level qualifications, four competitive and hopefully successful soccer seasons behind me and a rewarding life experience that I would not have had if I’d continued playing in England. It is my version of an American Dream.