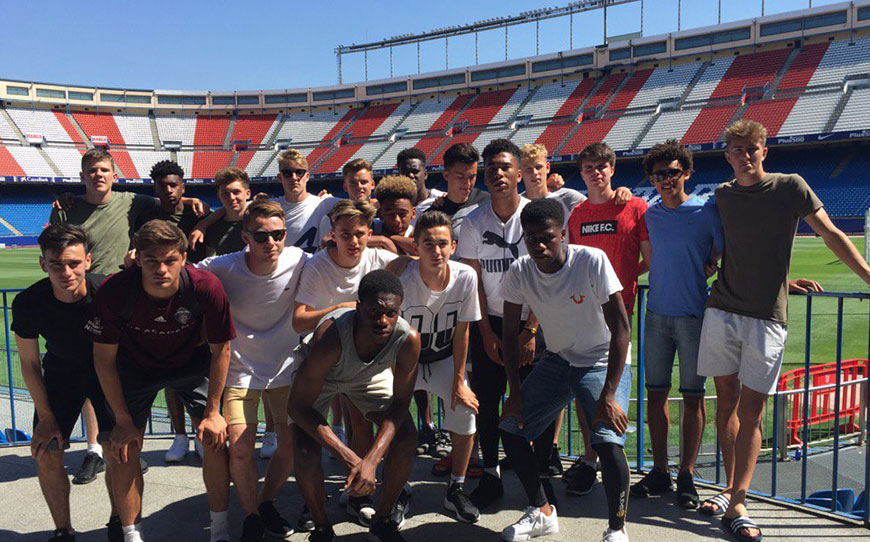 On Saturday, we played Atlético Madrid at their pre-season training ground, where the first-team also train during the summer.

They are a massive club and we knew it was going to be a tough game, so we had to be well prepared. Obviously, their first-team is one of the best in Europe, but their youth team also came first in the league last season, so we knew we were in for a tough contest.

Before the game, we spoke about the importance of taking our chances, and that proved costly early on as we had a few really good opportunities to take the lead in the first half, but it stayed 0-0 at half-time. We continued to be competitive in the opening 20 minutes of the second half and we felt like we were really holding our own and probably just edging things. On another day, we could’ve easily scored two or three goals as we continued to create good chances, but in the end, they were more clinical than us and snatched a 1-0 win, which was disappointing considering we felt a win for us would’ve been a more fair result. It was clear that Atlético like to keep the ball on the deck and play it around, but we did very well to frustrate them and forced them into a few long balls as they struggled to break us down and dominate us, which we can be very pleased with.

That was a great experience to play such a good team, and the following day was another great occasion for us as we visited Real Madrid’s training ground. The facilities and the complex as a whole is amazing and a lot different to what we’re used to. We were fortunate enough to have a training session there, based on what the Real Madrid teams do, which gave us a great insight into what it takes to make it at the biggest clubs in the world.

After that, we went to Madrid’s stadium – the Bernabeu – which holds a capacity of around 80,000, so it was very overwhelming to look around and imagine one day playing in front of a crowd like that. We went on the stadium tour and it was amazing to witness the size of everything and the history that surrounds you, with all the trophies and ex-players. It certainly motivated us to work even harder to aspire to reach this kind of level.

Having been to Real’s ground, we then went to Atletico’s Vicente Calderón Stadium, which was another inspiring trip. You have to set lofty goals to challenge yourself to make it to the top and seeing stadiums like this is exactly the sort of thing you need. It’s difficult to imagine the atmosphere of a full crowd inside these grounds and hopefully if we work hard enough and reach the top level, we could be playing in stadiums just like this. That’s the aim, so now we’re ready to put more work in.

For more reaction to Reading’s narrow loss to Atlético Madrid from defender Tom McIntyre, click the link below: