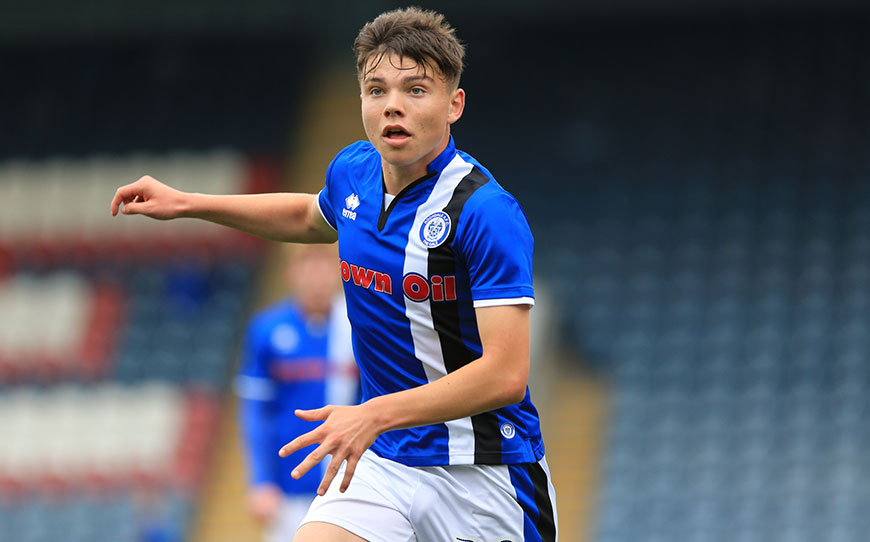 Rochdale prospect Aaron Morley has signed his first professional contract with the club after recently turning 17. The young midfielder has agreed terms on a contract that will keep him at Spotland until the summer of 2019.

Morley, who is in the first year of his apprenticeship was named in ‘The 11’ by LFE in October after making a fine start to the campaign which included his first team debut in October against Notts County in the Checkatrade Trophy.

Four days later, he made his league debut, starting in Rochdale’s win over Southend United and has made 6 first team appearances to date.

Manager Keith Hill said: “Aaron has been given an opportunity and he has taken it. That’s what’s unique about this football club – we give opportunities to young players.

“There was interest in Aaron from other clubs after we played him as a 16-year-old, so it’s brilliant that he has committed his future to Rochdale Football Club.

“It has been a brilliant season for him so far – he’s learning all the time. He has been learning while playing for the first team and the youth team, and his training has been superb. He’s ahead of his years.

“Aaron is a great signing for the football club.”

Tony Ellis, academy manager, commented: “I’d like to congratulate Aaron. He fully deserves this opportunity, and it’s great to see that all his hard work and commitment has paid off.

“From an academy perspective, it gives us an enormous sense of pride to see yet another scholar make the transition from our youth team into first team environment.

Morley said: “I love playing football and I love it here at Rochdale. I’m really, really pleased to have signed and to have been given the opportunity to sign a contract for the next couple of years.

“This is a big step in my career and I’m going to continue working hard to keep improving and developing.”

Morley joins a long-list of Rochdale players who have made the step-up from the club’s Under-18s to first team level with Dale recently lauded as having one of the best performing academies in the country.