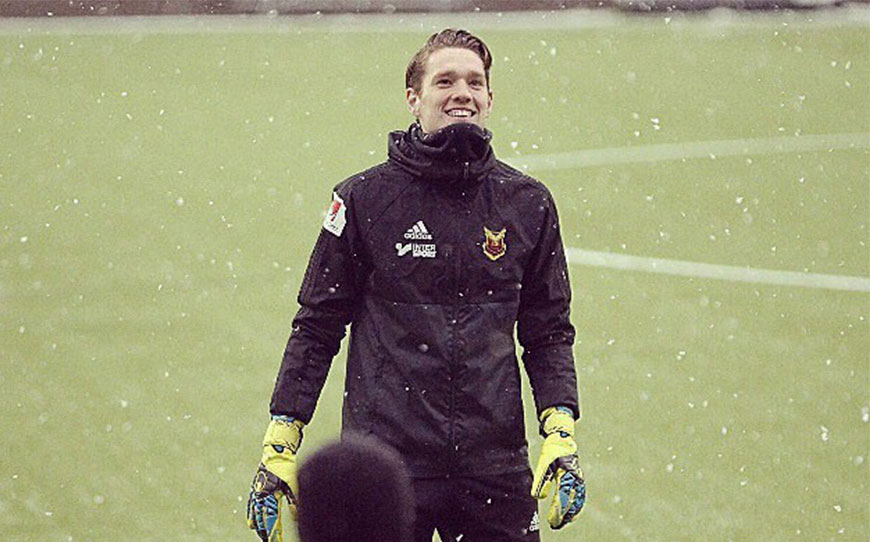 The Swedish season may have ended but when the Europa League resumes in February a handful of former apprentices will be given the opportunity to write their names into football folklore.

It is a tie of David vs Goliath proportions, especially when you consider that Arsene Wenger has been manager at Arsenal longer than Ostersunds have been in existence.

Until recently that existence was in the lower reaches of Swedish football, but Potter and his band of English imports have inspired three promotions and also a first trophy, last season, when they won the Swedish Cup.

Mills, the latest recruit, a goalkeeper who hails from Huyton in Liverpool, had been discarded by Macclesfield Town, when LFE provided him with assistance by sending him out to Sweden on the Player Placement programme.

“I’d stopped playing and lost the love [for football] after being released, so it was a big thing,” he told LFE.

“I spoke to LFE and they were really helpful explaining how it would be and that it might be a good opportunity to get back into football. It was tough moving away because I was close to my Mum and little brother but now they see this and how far I’ve come and are really proud. She always says it’s the best decision I’ve ever made, which I agree with.

“I started off in Division Four. I went from being at Macclesfield to the fifth or sixth tier in Swedish football.”

It was a startling life change, as was dealing with the sub-zero temperatures that have been known to plummet towards minus 20 in Northern Sweden where Mills was located. It was certainly a far cry from the North West of England.

While Arsenal’s superstar players are likely to test that comfort zone further, it is not a concept that the Ostersund players are unfamiliar with. The OFK players performed Tchaikovsky’s ballet Swan Lake to local residents last summer before more recently producing a concert, where the squad were asked to rap on stage.

“It was in front of two-and-a-half-thousand people,” Mills said. “I’m not a singer or a rapper by any stretch but it was a good experience, something I’d never done before and it opens your mind to what you can do and your confidence grows from it.

“As a football player, when you take yourself outside of the football pitch and put yourself in that kind of environment it does make you braver facing other situations you’re not used to.”

Mills’s story is one of perseverance and hard work and he is making the most of the opportunity he has been handed.

“I have loved it and wouldn’t change any part of my journey,” he adds. “It’s all just one big learning curve and I’ve matured as a person. Starting at the lower level you see the bigger clubs out here on TV and it feels a million miles away but one or two good seasons can change everything. It’s crazy.

“When I first moved over I could just about make beans on toast but you get used to it and start to enjoy things like that. You have to adapt and cooking is now one of my favourite hobbies.”

Mills had been in Sweden for just over three-and-a-half years, earning contracts with various clubs when his big chance arrived in the summer.

“I’d signed at IFK Ostersund in Division Two but the manager said there would be opportunities with Ostersunds FK, the team managed by Graham (Potter) which was a big attraction and convinced me to turn down other offers,” he continued.

“Within the first two weeks at IFK, Ostersunds called me up to go on a pre-season tour to Tenerife because they needed a keeper. When the second choice goalkeeper at Ostersunds got injured, I was called-up to their Europa League squad away at Galatasaray.

“We went to the ground three hours before kick-off and all their fans were booing and going crazy. It was what you’d imagine an away game at Galatasaray to be like, especially after we’d beaten them 2-0 at our ground.

“It just made the experience more special, seeing that kind of atmosphere.”

A permanent transfer saw Mills sign a one-year deal at the Swedish top flight club this month, meaning he is again eligible to feature in the Europa League, after their passage was confirmed by a 2-0 victory over Zorya Luhansk in November.

“It was kind of surreal really because you’re checking like how AC Milan, Arsenal, teams like that, who I’ve always watched growing up on TV, were doing, just in case we got them,” Mills said.

“I was hoping we’d get Everton but they haven’t got through. I’ve got a few mates that are Blues back home and they’ve messaged me saying it’s funny that we’re still in it and they are out.”