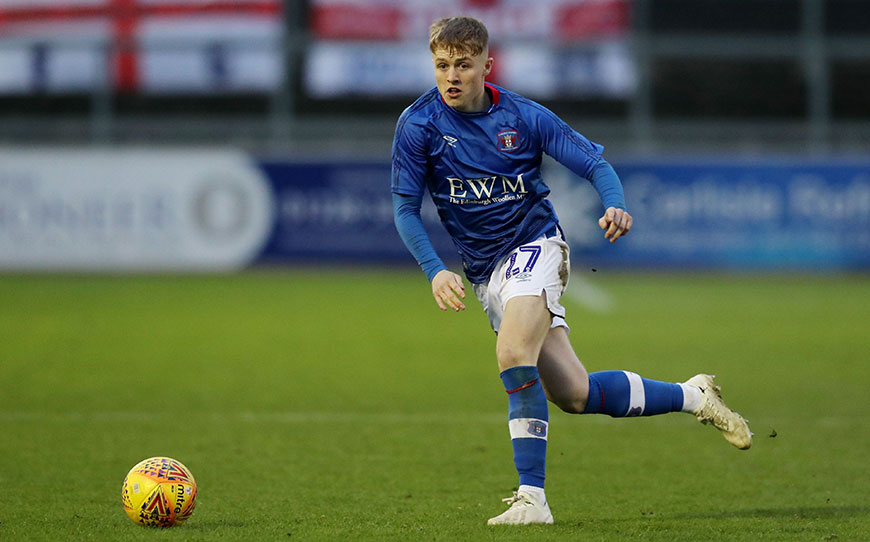 Carlisle United have secured the future of talented second-year apprentice Liam McCarron after he signed his first professional contract.

The 17-year-old winger has agreed an 18-month deal with the option of a further year having recently made his first three first-team appearances.

“I hope it’s a sign of the direction the club is trying to go,” Academy manager Darren Edmondson told the club website. “The connection between the academy and the first team is getting closer under the new regime, if the players are good enough.

“It’s great for Liam, obviously, and it’s also a bonus for the other players as well. Mentally it gives them a lift because they’ve seen some of last year’s players not even getting the chance to train with the first team.

“The place has changed now and they know if they’re doing the right things in training, and when they play on a weekend, that they’ll get a chance to go and train with the professionals. Once that happens it’s up to them to take that opportunity.”

McCarron made his senior bow at the start of September during a 3-2 Checkatrade Trophy victory over Morecambe, while two Sky Bet League Two outings against Tranmere Rovers and Stevenage have since followed.

Edmondson continued: “Liam was blessed with a lot of pace at the age of 15 and that’s why we took a chance on him. Mentally, at that point, he was a young boy who would get very frustrated very quickly.

“As he’s matured and come into full-time football that’s been the biggest change in him. He’s always had pace and the belief that he’s going to beat the person in front of him, but he’s become stronger with the mental aspects of the game. That was important, because it’s made him a better all-round player.

“He comes back to the youth team and still does his jobs, and I know he’ll continue to do that, so that’s a grounding in itself. There’s no ego with him, he’s just an honest young lad who is delighted to have signed his contract.”

Edmondson admitted that he hopes McCarron’s progression can inspire the rest of the Academy players to step up their efforts in pursuit of a professional deal.

He said: “When Liam came on in the cup game against Morecambe on the Tuesday night, all of the Under-18s had their phones out and they were up taking pictures of him.

“You could tell there was pride in seeing one of their own going out there. There’s a good spirit in the group because they’ve all come through the age brackets together.

“We keep telling them that it’s those who can control their emotions better who will close the bracket towards becoming a professional footballer quicker.

“It’s up to them to grasp any opportunity that comes their way. If they can get their own ship in order they’ve got a chance, because the new manager is going to give them an opportunity. He’s shown that repeatedly, and not just with Liam.

“The youth team trained with the first team last week and the manager said again that if players are doing the right things, and if the conversations are positive between the youth staff and him, then players will get their chance.”