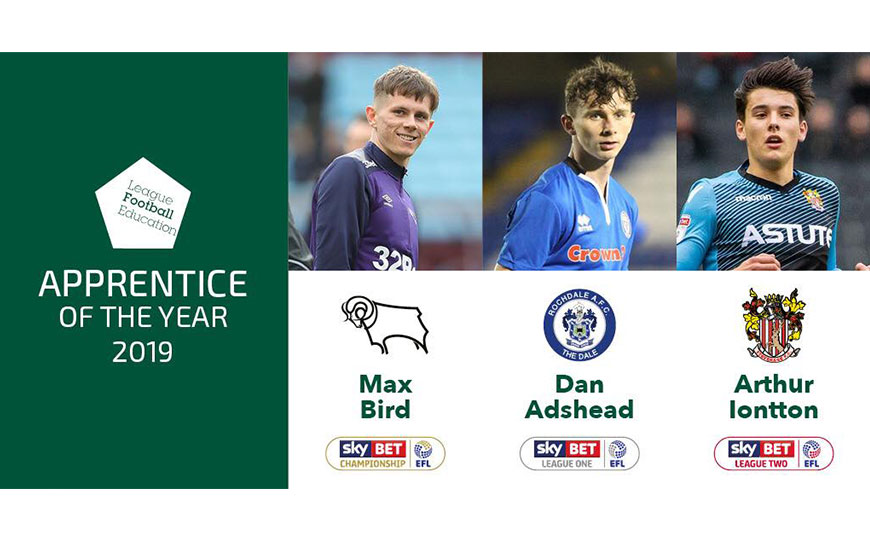 The winning trio for this season’s LFE Apprentice of the Year awards have been announced ahead of Sunday’s EFL Awards.

Derby County’s Max Bird claimed the Championship prize, becoming the third Rams Academy product to receive recognition after Lewin Nyatanga (2006) and Mason Bennett (2014). The League One award went to Rochdale first-year apprentice Dan Adshead, while Stevenage boast the League Two winner in their ranks for the second successive year as Arthur Iontton followed in the footsteps of defender Ben Wilmot.

The three starlets will go up against each other for an overall award, with the winner being revealed on the night at the Grosvenor Hotel in London.

Here’s a look at what made them the top candidates for each league:

Derby County’s Max Bird has been a high achiever throughout the full two-year apprenticeship, making his senior debut and penning his first professional contract just two months after starting the programme in September 2017.

A month later, the teenage midfielder received national recognition when he was named in LFE’s ‘The 11’ by Regional Officer Ian King, who lauded Bird’s great commitment to the academic side of the apprenticeship in spite of his first-team commitments.

The 18-year-old has added seven more appearances to his tally this season, including outings in the Sky Bet Championship, Carabao Cup and FA Cup, with his full EFL debut coming away to Aston Villa at the beginning of March, leading to an improved deal that will keep him at Pride Park until the summer of 2022.

Meanwhile, Bird has continued to demonstrate a tremendous attitude off the pitch, involving himself with the community via coaching sessions with a local primary school and contributing to the club’s Shoe Aid project, while he has also organised a plan for next year to complete the extra units required to gain an Extended Diploma.

Derby Academy manager Darren Wassall said: “Max has surpassed expectations so far and is currently ahead of where we expected him to be at this stage. Technically he is very strong and uses both feet in a good range of passing showing consistency in games and training. He has developed physically and improved in the 1-1 duels and challenges.

“His athleticism and fitness are a major strength and his stats are consistently high. Tactically he has an excellent understanding of the game and can adapt very easily to different systems and shows excellent leadership qualities when playing as a captain.”

Meanwhile, Head of Education & Welfare Simon Ord added: “Max is an outstanding young man whose attitude and behaviour has always been exemplary. He is honest, trustworthy and totally reliable in all he does and is keen to develop further both on and off the pitch.

“He is an excellent ambassador for the football club and has got involved in various enrichment activities within the community and presents himself professionally at all times.”

First-year apprentice Dan Adshead established himself as a member of the Rochdale first-team prior to even starting the apprenticeship, featuring nine times during the 2017-18 season, including a 15-minute cameo against Tottenham Hotspur at Wembley in an FA Cup fifth round replay.

Since becoming an apprentice, the highly-rated midfielder has continued to develop as a player. He captained Dale’s first-team in the Checkatrade Trophy against Leicester City Under-21s in November and also received his first England Under-18s call-up, scoring on his international debut against the Netherlands.

In addition, Adshead – who was named in LFE’s ‘The 11’ in December – penned a three-year professional contract just days after turning 17 in September, and yet has maintained motivation to stay on target with his education by using his spare time to catch up on work missed as a result of first-team duties.

“I first encountered Dan when I visited his school. He was Head Boy in Year 11 and was a fine academic scholar,” said Safeguarding & Education Officer Alistair Linden. “I have never had any disciplinary issues to deal with.

“His parents are incredibly supportive and during Rochdale’s run in the FA Cup last season, Dan complied with all my instructions regarding his education, completing his homework and following the Safeguarding Risk Assessment to the letter.”

Tony Ellis, Academy manager, added: “Dan has been an exemplary apprentice. As a Club his potential was identified very early and he was in the Manager’s eye from the age of 14. Dan is a credit to himself, his family and to the ethos of Rochdale AFC Academy.

“He exemplifies everything that Rochdale AFC is striving to achieve. He is a product of the Academy’s Vision and Philosophy. Without Dan’s talent, character and willingness to learn and improve, he would not be where he is today. He is a model apprentice and a fine young man with the potential of a great future in the game.”

A year after Ben Wilmot claimed the League Two prize, Stevenage boast another winner in the form of Arthur Iontton, who has combined studying the Extended Diploma with consistent first-team action during his second year.

The Under-18s captain suffered a long-term injury last season, but handled the setback admirably before forcing his way into the senior side for the final two fixtures against Exeter City and Wycombe Wanderers, while he has enjoyed plenty of opportunities this term with 17 outings in total having signed a professional deal in July.

Despite being based full-time with the first-team and representing the club at various community events, the 18-year-old has hardly missed a session at college and has remained ahead of schedule with his coursework, working towards at least a triple Distinction standard.

Iontton’s success on and off the pitch encouraged Regional Officer Gavin Willacy to nominate him for LFE’s ‘The 11’ in October, referring to the fact that the midfielder has set an ‘excellent example to all other apprentices with his attitude and behaviour’.

Stevenage manager Dino Maamria said: “Arthur is now a fully established first-team member. Since I joined in March, Arthur was spoken of highly by the academy. I gave him his league debut at the end of last year and his performance over pre-season left myself and the club no choice but to secure his services long term.”

Academy manager Robbie O’Keefe continued: “Simply a pleasure to work with. Arthur has always been a talented young footballer but his grounded background never allowed him to get too high or too low. Arthur fully deserved to be recognised for his achievement.

“Arthur is the complete role model for anyone who has ambition to be a footballer. He gives everything and always will. I honestly believe, having known Arthur since he joined the club as an Under-10, that because of his ability and application to his job, he will succeed in the long term.

“It’s an absolute joy to see him come all the way through. Arthur has always been a polite and well-mannered young man. He is now full time with the first team and I see no reason why he won’t go on to make many more appearance for this football club.”