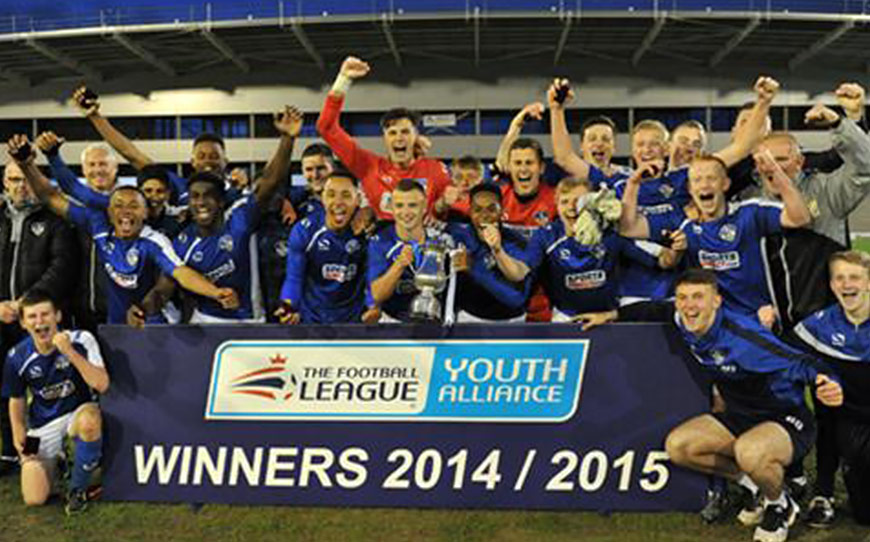 Oldham Athletic’s Under-18 rounded off the season in style and with silverware, thanks to an emphatic 4-0 victory over MK Dons in the Football League Youth Alliance Cup.

A goal in either half for Ben Grant put the young Latics two goals ahead, before Devante Jacobs and a wonder strike from Callum Etches sealed the victory.

Against highly rated opponents, Tony Philliskirk’s team started on the front foot, though were grateful to Goalkeeper Paul Tyson whom made several outstanding saves including one from a first-half penalty.

“It’s a massive achievement, to win that trophy,” said Philliskirk.

“There are probably only six teams that can win the FA Youth Cup, but there are more than 70 at our level, all even, that could win this one. We shouldn’t underestimate that achievement; it’s fantastic for the players, their families and the club.”

Captain Jack Tuohy lifted the trophy who, with Jacobs and injured Danny Byrnes, has been offered professional terms for next season. However for players like Grant, Tyson and Etches, this was a final hurrah in an Athletic shirt.

Tuohy and Jacobs could now get a run-out against Peterborough in the final game of the club’s Sky Bet League One campaign on Sunday.

Manager Dean Holden, who has been linked with the vacant manager’s post at Peterborough United this week, watched the game, but Philliskirk admits it’s Holden’s choice.

“Hopefully, this is a sign we are doing things right here. We work hard and press. The MK Dons philosophy is fantastic but we pressed high and they weren’t used to it,” he added.

“I’m so proud of the lads to put in a performance like that and as well with some players who’ve been told that they’re being released, you start scratching your head and thinking after performances like that, has the right decision been made but that’s another discussion for another day.”