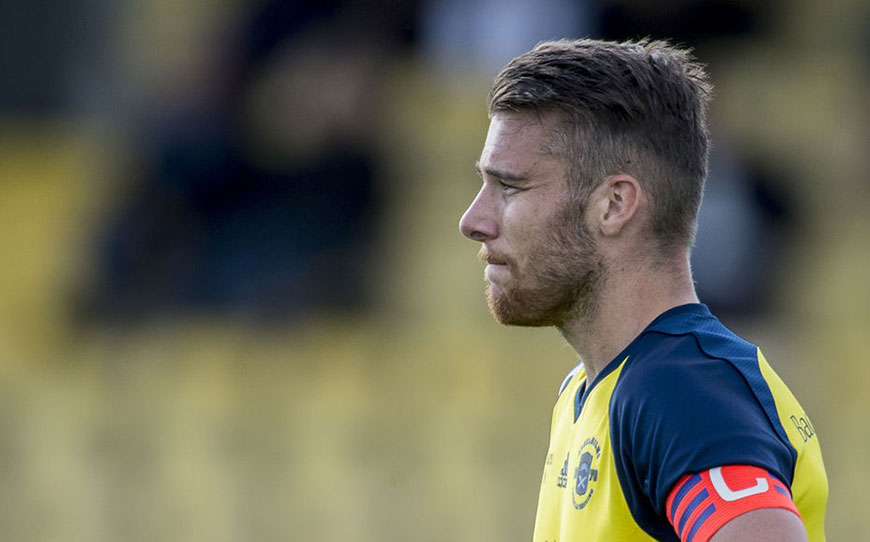 Not many English footballers can boast a list of previous clubs from Sweden, Norway and New Zealand on their playing CV.

Aaron Jones is an exception to the norm, despite admitting he “really hadn’t thought about moving abroad” after being released by Doncaster Rovers at the end of his apprenticeship in 2011.

Although he never earned a senior outing for Donny, the defender made the first-team bench as a second-year apprentice in October 2010 for a 3-2 defeat to Derby County and used that experience as motivation to sustain his playing aspirations.

He told LFE: “It was a huge deal for me. In a way, it did make it harder because I’d been so close and got to partly experience it but I think that gave me confidence and a drive to keep going and not give up.”

“The good thing about the trials is that they can open up doors that you’ve never even considered and at least make you think about different options,” he said. “I struggled with what I wanted to do for over a year after being released. I went to University and left, then qualified as a Personal Trainer and started working.”

However, not content with giving up on his dream of a career in football, Jones decided to take his talent on the pitch to the other side of the globe in New Zealand with Hawke’s Bay United.

He said: “I knew a lad that was already over there and he had recommended me to the coach of a Premiership side out there. I was a PT at the time and just thought I’d take the risk.

“I didn’t have anything to lose – I was only signing a one-season contract, so at the very worst I knew I was going to get to experience New Zealand and then come back.

“I really enjoyed the lifestyle and I lived in a really beautiful place close to the beach. We would usually train later in the afternoon because some of the lads had work or studies in the day. I had some coaching hours in my contract, so I’d go into schools and put on sessions with a few of the other lads.”

The gutsy move clearly paid off for the Chesterfield-born centre-back, who spent two years in Napier before a switch to top-flight outfit Waitakere United ahead of their Oceania Champions League campaign.

Jones said: “The Champions League over there is held after the league finishes and the two teams that qualify from New Zealand can sign a few players from other teams around the league to strengthen their squads.

“It was an unreal experience, playing in Fiji and in the Champions League, albeit not the one I had dreamt of playing in growing up! Although we performed lower than expectations, it is still right up there with being on the bench in the Championship as a career highlight.”

With four points from a possible nine, the team were unable to qualify for the knockout stages as they finished third in a group consisting of clubs from Samoa, the Solomon Islands and French Polynesia.

Having experienced the pinnacle of club football on the continent, Jones decided it was time for a new challenge back in Europe, although returning home was not on the agenda. The 25-year-old said: “My agent called and said he had a possibility in Norway with Raufoss IL. This was a Monday night and by 4am on Tuesday morning I was at the airport. They took such good care of me and made me feel so welcome – I loved it straight away.”

A promising start was disrupted by breaking both feet within five months of his arrival in Norway, but Jones used the time on the sidelines to get to grips with his new surroundings.

“I have always wanted to learn a language, so as soon as I came I was asking the lads for different phrases and stuff,” he added. “When I got injured, I started to take it a little more seriously. I even had the older lady who worked in the gym giving me different phrases to learn every day, then she’d test me the next time I went in.

“The culture shock wasn’t too bad. It was summer when I arrived, so I didn’t know what all the big fuss about winter was – until the snow came in October and didn’t disappear until April!”

After experiencing promotion and relegation with Raufoss, the 6ft 3in defender made a brief return to England, before quickly jetting off back to Scandinavia to captain Ängelholm in Sweden.

Following a nine-month stint, Jones returned to Norway in January to sign for Asker, who are currently battling for promotion against his former side, Raufoss.

And Jones is now preparing for the future having started a Business Management and Economics degree course via the Open University, which he believes is contributing to improvements in his performance on the pitch.

He continued: “I hadn’t studied at all since leaving University at 19. But over the past few years I’ve gained a real interest in business – I put it down to time and maturity I think.

“I never thought I’d go back to higher education after the first time but I actually really enjoy studying now because I’ve found something outside of football that I am really passionate about. I still have aspirations to play as high as I can, but I also have dreams and goals away from the pitch for the first time in my life.

“In my opinion, my study has actually helped my football. It gives me something else to concentrate on, which I personally need, otherwise I can beat myself up about a bad training session or game for far too long.

“I’ve got a long time studying left because it is part-time, but it just makes it so much more manageable and I should have a degree before I have stopped playing, which will set me up nicely for when that time does come.”

Jones’ current deal runs until the end of 2019, but having enjoyed a six-year journey abroad so far, the Doncaster academy product has no plans to end his foreign adventure.

He said: “If I could give any advice it would be to keep playing at the highest level you possibly can. Don’t worry if you haven’t got too much of a plan because from the age of 18 to 24 so much changes, you find out so much about yourself and really mature as a person.

Moving abroad and playing has given me everything I want as a player. Off the pitch, I’ve seen some beautiful parts of the world, I’ve learned a new language and even met a girl. I don’t know anybody that has regretted giving it a go.

“I’m so happy I took the chance to go to New Zealand and prolong my playing career. It’s taken me all over the world and I’ve done so many things that I’m proud of, while also giving me the time to find out what I want to do after my career.”