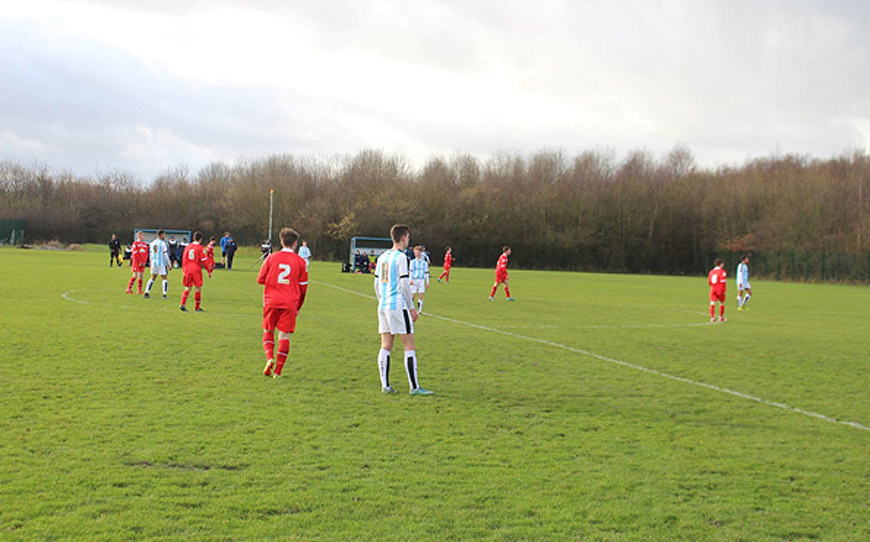 By Matt Temple-Marsh: Huddersfield Town U18s came from behind to defeat Crewe and in the process extended their unbeaten run to eight games.

Tony Carss hailed his team for “good goals, good energy and good character” after this stirring fight-back. Carrs saw his team hit the front courtesy of Rekeil Pyke’s early effort but then watched Crewe storm back with goals from Owen Dale and Jonny Higham.

Town recovered in the second period though and strikes from Rarmani Edmonds-Green and Lewis O’Brien maintained their fine league form.

“We’ve been a lot better in the last seven or eight games performance wise, so we’re a little bit disappointed with our performance to be fair, but the conditions were obviously difficult.” Carrs said.

Despite the challenging conditions, the young Terriers managed to take the lead early when Pyke reacted quickest to score from a rebound. The Railwaymen replied emphatically though, with Dale flourishing down their left. His 16th minute strike brought the teams level.

“He’s been scoring a lot of goals,” said Alex coach Kenny Lunt. “He’s one of the hardest working players we’ve got, he shows a good reaction and he is a skilful and talented footballer.”

That talent was evident 5 minutes later as Dale laid on Higham’s 21st minute goal. Alex almost extended their lead as the first-half drew to a close but Luke Whalley was flagged offside after placing the ball in the back of the net.

Carss half-time team-talk galvanised his players and they came out of the blocks with renewed belief.

Londoner Edmonds-Green took advantage of some questionable defending to score his first goal for the club and restore parity. Now well on the front foot Town’s comeback was complete on the hour mark when Lewis O’Brien broke away from the visitors defence and riled a superb shot past Alex keeper Kieran Harrison.

The margin of victory could have been extended but for Harrison’s excellence to deny Luca Colville and the goal scorer O’Brien.

“We showed good character to keep trying to do the right things even though we weren’t at the level that we have been at,” Carrs added.

Lunt meanwhile was disappointed by the outcome, “It was a mixed performance,” he said. “At times we were really good and kept the ball well and made chances, but every time the ball came into our box we looked like we were going to concede a goal.”