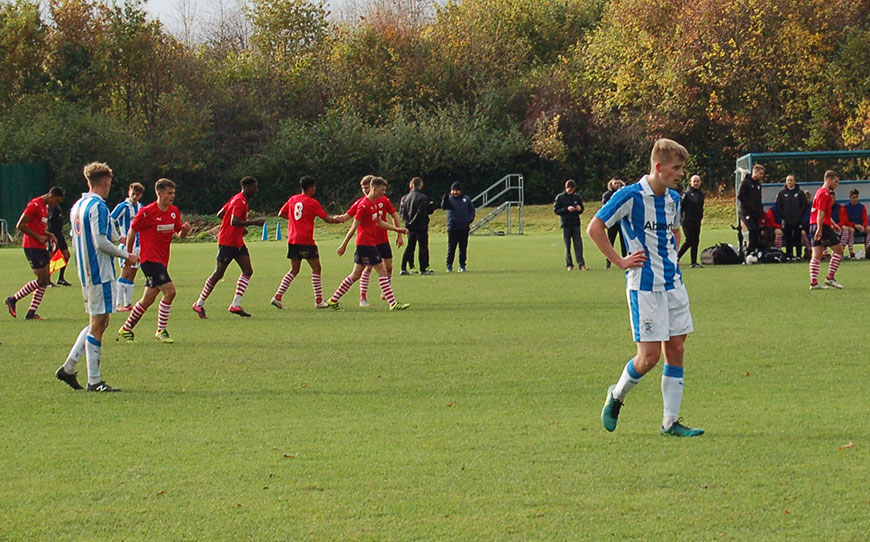 By Seb Gigner: A four goal salvo from Louis Rowe ensured that Barnsley emerged as 4-2 winners from a pulsating clash against Huddersfield at Canalside on Saturday.

The result lifts the Tykes to fifth in the Under-18 Professional Development League above Town, 8 points off leaders Sheffield United.

This outcome was a formality after Rowe completed his hat-trick in the opening 45 minutes and he grabbed a fourth after the break though Cedwyn Scott and Rarmani Edmonds-Green reduced the arrears for the hosts.

Barnsley raced into an early 8th minute lead when Romal Palmer touched the ball on to Rowe, who drilled an emphatic strike home from inside the box.

Huddersfield nearly found an instant leveller with a fierce effort from Denilson Carvalho, however hesitation at the other end of the pitch allowed Rowe to snatch the ball away from Town keeper Owen Brooke and double Barnsley’s lead.

That advantage was increased further late in the first half when Rowe capped a sensational hat-trick, slotting home coolly after latching onto a pinpoint pass from Wilberforce Ocran.

Huddersfield though replied moments later with Harry Clibbens’ searching cross, tapped home at the far post by Scott, to raise their hopes of a fightback after the interval.

That never materialised though. Adam Lund hit the cross bar for the visitors before Rowe hit their fourth in the 70th minute.

Palmer burst into the Huddersfield box, evading several challenges and squared to Rowe who made no mistake from close range..

It was not enough though to threaten the visitors or quell a general feeling of disappointment within the home ranks:

“All the goals we conceded were really poor” said Huddersfield U18 coach Tony Carss.

“We spoke at half time about showing a bit more commitment and the desire to win the long balls, scrap a little bit and to just compete.

“We’ve made individual errors for the goals which were disappointing.

“At the minute we’re just a little bit inconsistent. We’ve got to learn, some of the lads can’t get too comfortable thinking they’re guaranteed to play every week if they’re not improving and not learning.

“There’s always somebody who wants your shirt, and you’ve got to fight and compete for it, it’s not a given.

“If you want to progress and get to the first team level, you’ve got to be able to be trusted on the pitch in regards to your role, your job and what your responsibilities are,” he added.