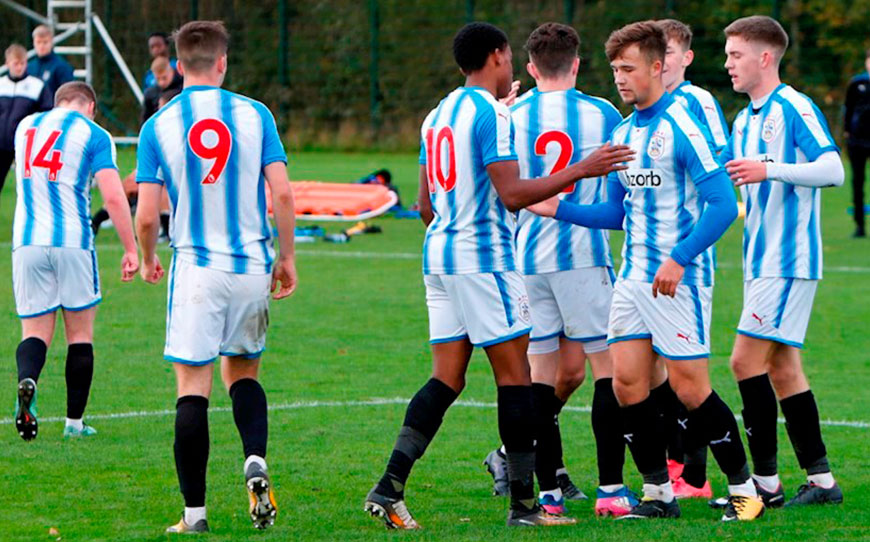 By Tom Lamming: Leeds United Under-18s battled their way back from an early two-goal deficit to draw 2-2 with Huddersfield Town Under-18s thanks to goals from LFE September Goal of the Month candidates Jack Clarke and Bobby Kamwa.

The Terriers had looked in command after Micah Obiero and Scott High found the net, but the result means they were knocked off top spot by Nottingham Forest, while Leeds improved to third in the Professional Development League North.

It took the hosts just three minutes to force their way in front when Obiero clinically dispatched a left-footed strike into the far left corner to register his fourth strike of the season.

Huddersfield doubled their lead just 10 minutes later as High reacted sharply to a loose ball and bundled the ball home from close range.

The Whites responded positively and began to apply pressure on the home side, with chances for Kun Temenuzhkov and Moses Abioye, who both missed the target despite being played through with just keeper Luke Mewitt to beat.

The visitors finally reduced the arrears from the penalty spot after Abioye was brought down in the area, with top scorer Clarke slotting in his ninth of the campaign.

The goal on half an hour sparked the away team into life as they pinned Huddersfield into their own half for the remaining 15 minutes, although an equaliser proved elusive before half-time.

However, the Whites did get back on terms inside a minute of the restart through a spectacular strike from Kamwa, which hit the underside of the bar and into the net from 25 yards out.

Leeds appeared more likely to snatch a winner until they were reduced to ten-men when Matthew Keogh was dismissed for a second bookable offence after a rash dive on the edge of his own area.

And the biggest chance of the final stages fell to Terriers midfielder Matty Daly, who was unable to restore his side’s lead as he missed the target from two yards out, meaning Huddersfield are still awaiting their first home win since the opening day of the season against Bristol City.

Huddersfield PDP coach Leigh Bromby told LFE: “Going 2-0 up it’s disappointing for them because they should have gone on from there – we just took our foot of the gas.

“The lads will improve defensively because they are working on it every day and that’s just their natural progression.”